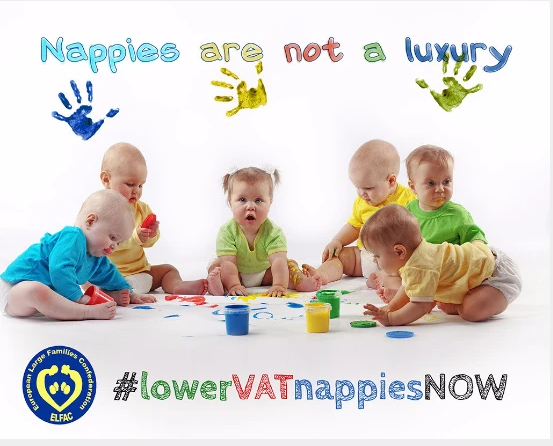 On 1st of June 2015 ELFAC launched a campaign that aims at lowering the value added tax on baby care products which currently in many countries are in the highest rate category together with luxury goods. Member associations have spent years demanding a change, to have a fair tax treatment of those products as necessary goods, since they have a significant impact on families’ economy.

ELFAC considers unacceptable that baby diapers, a product that is essential for newborns and affects their health, have the highest
VAT rate equal to cosmetics, jewellery or travels. To distinguish the campaign ELFAC has already created its unique visual identification, a separate webpage, as well as a visual identification and hashtag (#lowerVATnappiesNOW) that allows particulars and entities to join the campaign and get the promotion viral in social media. The campaign shall end with submitting a petition to instances of the European Union with the request of presenting the case to the Council of Economic and Financial Affairs of the EU

Strategy: To bring attention of the public to the problem and to the harmful consequences it causes. To promote the campaign virally and get support from other entities and public bodies. To submit a petition to instances of the European Union