The European Large Family of the Year 2015 announced!

The first award was held on 9th December 2015 to the Family Postigo-Pich from Spain (presented by Spanish Federation of Large Families – FEFN). 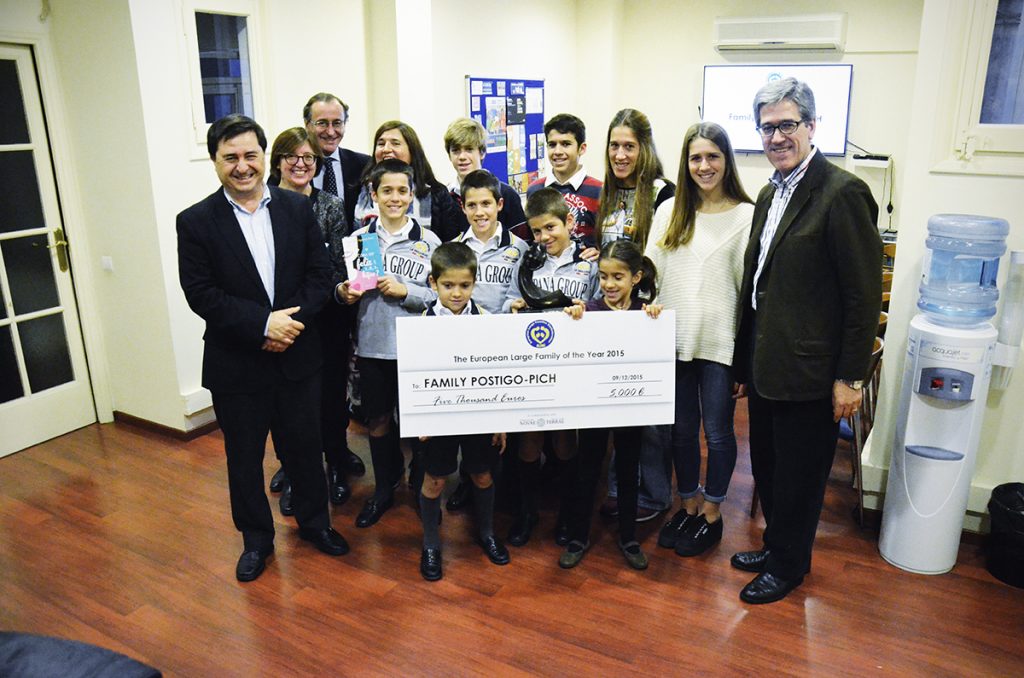 The Postigo-Pich Family, who lost their first three children, “are an example of struggle and overcoming.” They have donated the prize (5,000 euros) to social projects in favour of European large families.

Jose Maria Postigo and Rosa Pich and their 15 children have been chosen the European Large Family of the Year. The award was today given by the European Large Families Confederation (ELFAC) in collaboration with Novae Terrae Foundation (NTF), to recognize and value a large European family that has stood out for its values and contributed to a better society.

The winning family today received the award from the Minister of Health, Social Services and Equality of Spain, Alfonso Alonso, at the headquarters of the Catalan Association of Large Families of Catalonia (FANOC) of which the Postigo-Pich are members. The Minister, accompanied by the Vice President of the ELFAC, Regina Maroncelli, has given them a sculpture representing a large family and a check for 5,000 euros, amount that the family has decided to donate entirely to the development of social projects for European large families.

The family was pre-selected by a European jury, along with six other families who had been submitted by the Association of Large Families in their respective countries, and was finally chosen as “an example of struggle, desire to excel and commitment to life.” Their first child was born with a severe heart disease (although doctors gave him only three years of life, died in 2012, at age 22, after graduating and finishing a Master) and the other two died of the same problem, one 10 days and another in his first year and a half old. Doctors advised them to do not have more children, but they decided to say yes to life and their follow their desire to have a large family.

Currently, having 15 children, are the large family with the most number of children at school age in Spain and probably in Europe. Heart problems of their kids never broke down the couple, but inspired to look at the problems of the others: they got involved into creation and actively promote a foundation “Menudos Corazones” (“What a piece of heart”; www.menudoscorazones.org) to help children with heart problems.  They have participated in numerous reports and documentaries about large families, while providing family counselling talks to help other parents. A couple of years ago, the mother also reflected her experience and the secrets of the family happiness in the book “How to be happy with 1, 2, 3 … children”, which’s signed copy she gave today to the Minister.

Click here to read the presentation of the award-winning family.

To see the photos from the event, click here.