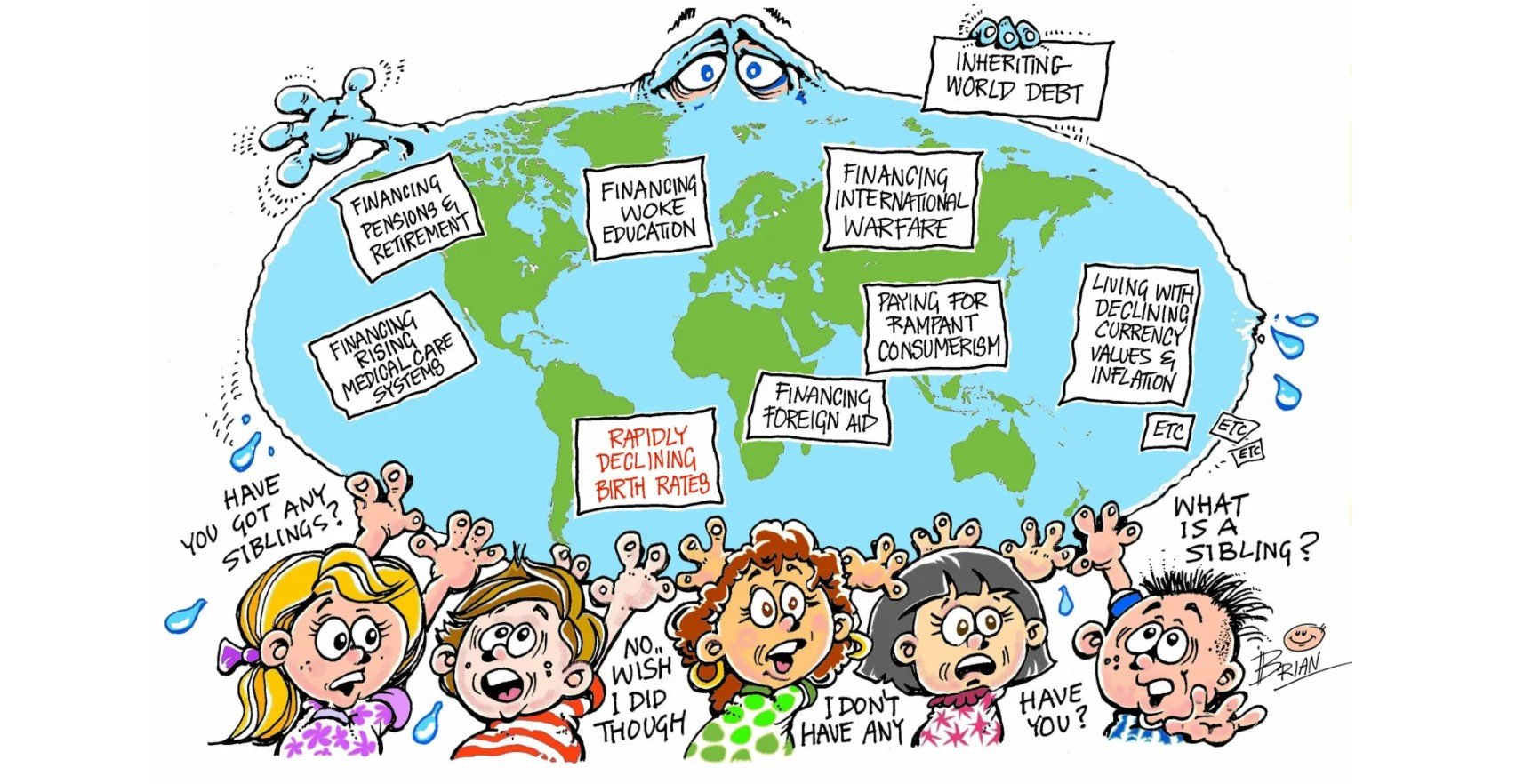 By Louis T. March in mercatornet.com (cartoon by Brian Doyle)

One thing demographers have known all along is something you cannot deny: “Demography is destiny.” The phrase was coined by 19th century Frenchman Auguste Comte. Agree or not with his positivist philosophy, he nailed it about demography.

While clickbait comes at us with news of wars, markets and celebrity gossip, the bigger story, the backstory behind so much of everything, is demography.

Demography didn’t get much attention in legacy media until 2020 when the British medical journal The Lancet released the most comprehensive world fertility study to date. The study documented a mysterious, unprecedented earth-shattering trend: a 50% decline in world fertility over 50 years, with no end in sight. Even the study’s scholarly authors described their findings as “jaw-dropping.”

We are only beginning to realise the social, economic and political impact. Look no further than the United States. Trends in America are followed worldwide and tell quite a tale.

For decades, well into the 1960s, US pensions and retirement benefits proliferated. Why not? Back then, relatively few people lived beyond 80, and it was a given that there would be four or more workers to support every retiree.

But things have changed mightily since Social Security and elderly healthcare schemes came of age. The heady days of easy money are gone.

First, people live much longer and have fewer children. The US fertility rate is 1.7 children per female, 20% below replacement level.

Also, the dominant world reserve currency — the US dollar — has diminished in value. Back in the 1960s you could buy a Coke for a dime. Now it’s at least ten times that. Is the soda worth more, or your money worth less?

Today two incomes are necessary to support the average family. That wasn’t the case back when a Coke cost a dime. Women, mostly out of necessity, entered the workforce.  That meant less family time. In such a system, children become a financial liability.

Then there is the uniquely American higher education industry, a colossal con commanding exorbitant subsidies and insanely inflated fees for a ticket to upward mobility. For the average American family, the costs of college are their largest expenditure apart from the family home.

Covid, the economy and lower fertility are testing the diploma mills as never before.  Also, a growing number of Americans are beginning to push back against a pious professoriate that subordinates authentic education to woke indoctrination.

Today there are over 65 million Social Security beneficiaries and 132 million people who work full-time, just two workers kicking in for each beneficiary. And a lot of those full-time folks don’t make much. On top of that we have Medicare, Medicaid and a vast global imperial footprint, all financed by a fiat currency that is losing value. Without at least replacement fertility, these systems will see a slow-motion collapse.

Also in the mix is an American popular culture promoting consumerism and instant gratification, prioritising creature comforts over children. Hedonism is not family-friendly.

Over time the powers-that-be have tried to fix things with:

The above short-term fixes have not worked. And let’s face it: the days of global dollar dominance are numbered. There is a disastrous disconnect between public policy and demographic reality. Try as we might, there is no substitute for children.

At the very least, supporting families and children should take priority over subsidies for the elderly. But the elderly vote, and politicians care more about the next election than the next generation. However, supporting parents and children is the solution to preserving retirement programs and the society at large.

Superpower status at the expense of family is a Faustian bargain. We need to hunker down and focus on the family instead of propping up the wastrel welfare/warfare state. Yes, it can be done, though it will require changing our ways, establishing new priorities and investing in the future of families.

If not, look no further than ancient Rome. They also dumped their Republic, became an Empire, spent like crazy and came to neglect the welfare of families.