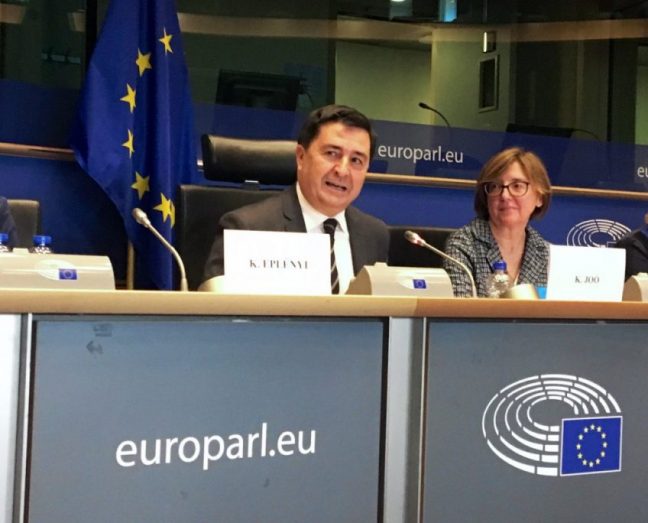 The Conference took place on Tuesday, November 27, from 1:00 pm to 5:00 pm, in the European Parliament, and was held in two different blocks. In the first panel, several members of the European Parliament from Hungary, Slovakia, Croatia and Italy referred to the importance of taking the family into account in the design of European policies. Attila Beneda, Hungarian deputy secretary of state on family policies, talk about the good practices that the Government of Hungary has developed and the goals for this year 2018, which has been proclaimed ‘Year of the Family”.

After the panel, Kata Gyurko, president of the Hungarian Large Families Association NOE, gave the ‘International Award 2018’ to Raul Sanchez, general secretary of ELFAC, for his generous work in the interest of families.

In the second part Regina Maroncelli, president of ELFAC, explained what were the five requests that the European associations of large families are going to promote so that the political parties include them in the electoral programs for the next European elections next May, 2019. These are:

1. Modification of the VAT regulation to allow European countries to reduce the VAT for diapers and basic goods for babies (now, they are taxed by European Union with the highest rate of VAT).

2. Recognition of the unpaid work in the household (invisible work) considering this time as a contribution for the social security (pensions) or receiving a salary from the State for this type of work. In order to calculate the national GDP to take in account the value of the household work (as already is done, for example, with the value of gambling or prostitution).

3. To allow large families with more than nine members to drive a van or mini bus for the familywithout the need to get a new driving license as professional driver as it happens now.

4. To not discriminate large families by reason of number of children in the tariff of basic consumptions (water, electricity, etc.).

5. Recognition of the European Large Family Card to facilitate the mobility of large families and their access to special benefits (cultural, transport, etc.) through the different European countries.

Two young representatives of the youth meetings on family policy, who have been organized for three years with the support of the Hungarian government and the collaboration of ELFAC, also talked on their good experiencies with this initiative.