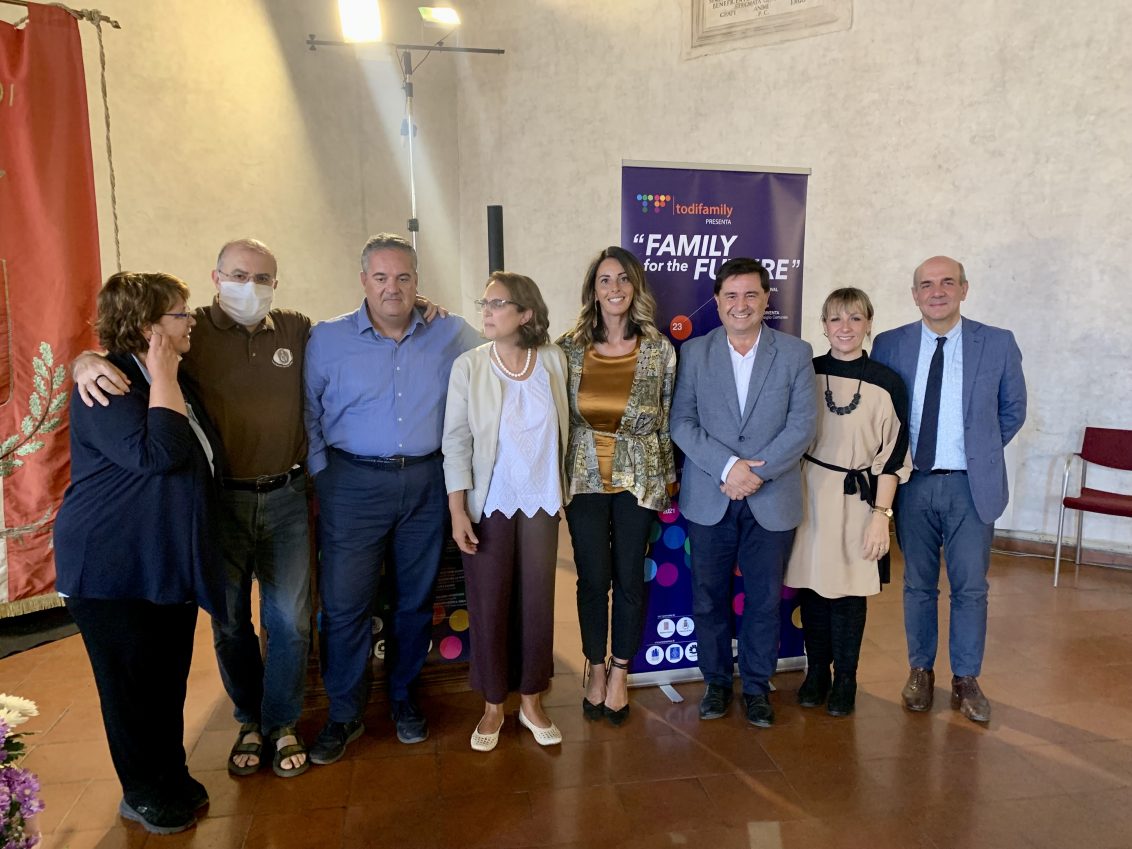 “Family for the future’ is the title of the first Todi Family Festival.

Four days of seminars, meetings, moments of reflection and events “to shape the family for the future”. Guests at the event, organised by the Municipality’s Office for Family Policies, included Luciano Malfer, director of the agency for the family, social cohesion and young people of the Autonomous Province of Trento, the presidents of our association Mario and Egle Sberna, the coordinators of the National Network of Family Friendly Municipalities Filomena and Mauro Ledda, Giancarlo Blangiardo, president of Istat, Raul Sanchez, secretary general of the European Large Families Confederation (ELFAC), together with sociologists, economists, educators and many other speakers.

“With the Festival of Family Policies, the municipality of Todi – explains the councillor for family policies Alessia Marta – wants to bring attention back to the theme of family well-being, which has been put on the back burner. Today, more than ever, we need to push the accelerator to make that paradigm shift that allows us to see the family no longer as a problem but as a resource. In Todi there were no births in January and February this year, which means that no children were conceived in the lockdown months, demonstrating that only those who look to the future with hope think about having a child. With Family for The Future we will try to reinforce this idea, also sharing policies and good practices from other regions and cities with those implemented in the Municipality of Todi”.

The point of reference will be Trentino’s family policies and the National Network of Family Friendly Municipalities, to which more than 100 Italian municipalities have joined so far.

Raul Sanchez, secretary general of ELFAC, presented the new website of the European Network of Family-Friendly Municipalities, and announced its second congress wich it will take place in Brussels next November. Talking about this Network, Sanchez concluded that “if we know how to introduce the urgent measures we need in this crucial situation from all areas (civil, social, economic and political), we will be able to meet the challenge of demographic change under favourable conditions and the family will gain its place in society and the prominence it deserves.”

The Vice-President of the Umbria Regional Council, Paola Fioroni, who is the first signatory of a proposal for a regional law on the family, was present at the Festival and undertook to bring the good practices discussed during the Festival to the attention of the highest regional assembly.

“Family is not the problem but the solution”

“The problem is that until now we have continued to repeat the same things”. And therefore to see the family as a problem and not as the solution to the problem. This is why the Family for the Future, the festival of family policies that closed on Sunday 26 September, in Todi, talked about ‘solutions’: virtuous examples of how to finally see the family as a resource.

Dr Simonetta Saveri, manager of the Genova Family Agency, illustrated some good practices of the “Genova insieme” project, focusing her speech on self-help groups. Family policies are not welfare policies,” he said, “but affect all sectors: the economy, the social sphere, culture. We must finally free ourselves from this mentality of widespread welfarism”.

From Perugia came the Family Hub project (‘Città famiglia – Tutta mia la città’ is the title) illustrated by Alessandro Moretti, president of the provincial Acli, and Vincenzo and Sarah Aquino, regional representatives of the Associazione famiglie numerose. It is a ‘service centre for the family’ that will move along four macro areas thanks to an important economic investment (200,000 euros) by the Municipality of Perugia. “We have a front office,” they explained, “that people can turn to for tax assistance or family advice”. But the hub is also a “container where actions and activities can be expressed”. “A ‘school for families’, added Vincenzo Aquino. It will be inaugurated on 18 October.

The Municipality of Foligno, on the other hand, is on its way to becoming a ‘family-friendly municipality’. “We want to create a ‘village of families’,” explained councillor Armando Cetorelli, illustrating the new provisions on family fostering (the contribution to families has been raised from 300 to 500 euros) and all the other areas in which the administration is intervening from 2019. There is – for example – the newborn bonus, i.e. one thousand euros for every child born, the establishment of the family office to offer support and assistance, the “sports discount” calibrated to the family factor (rates go down according to the number of children enrolled in a course) with the aim of reversing the trend that the demographic collapse numbers testify as clearly as dramatically.

“We are beginning to understand the economic impact of the demographic collapse”, Bassi said, stressing that “if we do not reverse the demographic trend, the Maastricht parameters will certainly be overturned”. The change of perspective is therefore to start thinking of family resources as an ‘investment’, i.e. not as a cost but as a ‘capitalisation’. “The family is the first business” and it is necessary to start talking about “tax relief” for families, about rewards and not “incentives or bonuses; otherwise – concluded the Fafce president – the politician changes and the measure changes”.

The problem,” De Palo said, “is that until now we have continued to repeat the same things. Enough with the resignation, with the mosciume: the family is adventurous, beautiful, difficult but colourful. We know that families have been the country’s oil during the pandemic. The temporary allowance started on 1 July, an initiative around which we managed to unite Parliament. And around which there is a lot of chatter. The facts say that today we have 6 billion more for family policies, with the fund increasing from 14 to 20 billion. There are 4 million more families receiving this support and for 2 million families there will be an increase. Could more be done? – asks De Palo. Could we have done better? Of course. The real game starts in January, with the introduction of the single universal allowance: we have the opportunity to do a masterpiece, an epoch-making reform. We need to reunite the country around the fact that there is beauty in having a child and – at the same time – realise that the birth rate is the new social issue.

On the final day of Family for the Future there was the delivery of the baby boxes to the newborns of 2021 as a sign of welcome from the Municipality of Todi, “because a child is a precious resource for the whole community”.