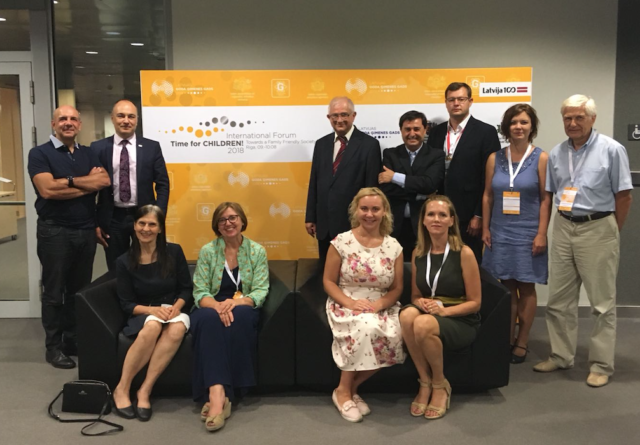 Is there a future for Europe, or the demographic crisis that is emting the easter Europe is going to invest the whole Continent? Is immigration the answer? From the international forum “Time4children” organized in Riga in the middle of Augut more news about the collapse of birthrates and the spirit of coutries like Latvia, and Estonia, Hungary or Poland that will not accept to desappear.

ELFAC was represented in te Forum by the president and the secretary general, Regina Maroncelli and Raul Sanchez, by the honorary president, Laszlo Marki, and by representatives of large families associations from Latvia, Poland and Hungary.

“In the beginning of 2000 this problem was solved partially by attracting masses of workable residents from the new EU memberstates – as a result they have lost almost one third of the young-future generation. A few smaller nations, for example, latvians and lithuanians have encountered extinction threats in the forseeable future.

Ever since the beginning of this century they have lost more than 18% of their residents. The young ones – almost twice the number. The rapid depopulation threatens us to have serious economical, social and political shocks.

That will unavoidably influence the rest of Europe where the aging process hasn’t stopped too. But Europe continues and will continue to age if we are not ready to create the next generation.

Families with no children or families with one child in connection with the demographical dip of the 90-ties has resulted in rapid depopulation in many European countries, which threatens to have serious economical, social or political shocks.

In order to avoid the existential crisis of Europe in the forseeable future, we have to come together and realize the seriousness of the situation and come up with solutions so that families would want to and could afford to raise children. There are countries that have good ideas and tested solutions in how to help families with children.

The housing support program in Hungary, Latvian Great family certificate program (3+ Family card), family-oriented municipality movements. There are countries that have managed to stabilize the situation. By sharing experiences, looking for unified solutions and tested ideas, we can all together find a rescuing response – Europe to be!”

Photos of the Conference here