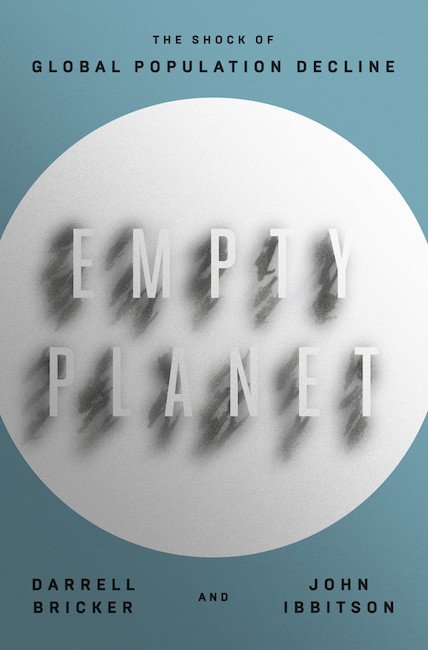 For decades, the United Nations has been warning of a population explosion that will threaten the world’s resources and exacerbate climate change. In fact, the opposite is happening, say the authors of a new book who contend that within a century, the population will begin to decline and never recover.

In “Empty Planet,” Canadian writer John Ibbitson and pollster Darrell Bricker contend that the U.N. has failed to fully consider the effects of of urbanization, which has caused children to be seen as an economic burden instead of an asset, while equipping women to be less dependent on a family for financial and emotional support.

In addition, the shrinking influence of religious institutions and the widespread availability of birth control has contributed to a world in which the population of most developed nations is already below the replacement rate of 2.1, and continues to shrink, the authors say.

The trend amounts to a “population bust” that will require robust immigration to keep economies afloat, Ibbitson said in an interview with the Deseret News.

A writer for the Canadian newspaper Globe and Mail, Ibbitson said the coming changes illustrate the need for public policies that help parents and warns that even states with relatively high birth rates, such as Utah, will see a decline.

But he maintains that population loss isn’t a good thing or a bad thing, but “a big thing” that will affect not just individual families but the global economy within a few decades.

This interview has been edited for clarity and length.

Deseret News: Your forecast contradicts that of the United Nations, which maintains that the world’s population, now 7 billion, will grow to 11 billion, then level off. You believe the population will peak at 9 billion between 2040 and 2060, then steadily decline. You and your co-author are not demographers; why should the U.N. listen to you?

John Ibbitson: They shouldn’t listen to us; they should listen to the people we talked to. But you’re right, Darrell (Bricker) is the CEO of Ipsos Public Affairs, which is a global polling firm; I write for the Globe and Mail, which is the national Canadian newspaper. The topic of population growth is something that has long interested both of us, and we had collaborated in the past on a book on Canadian politics and how demographic shifts were influencing Canadian politics. We wanted to look at it globally.

” We believe that governments everywhere should, as much as possible, make it easier for people to have children.” – Author John Ibbitson

We were aware that the United Nations’ population division says we’re going to go from 7.5 billion now to more than 11 billion at the end of the century, but there is a school of demographers who think the U.N. is wrong, who think that we’re only going to get to 9 billion by the middle of the century and then it’s going to go down. So we decided to go around and talk to the people on both sides, and also travel around the world and talk to young women and men about the decisions they are making about their own lives and the family structure they wanted. And we think, all in all, the U.N. numbers need to be questioned.

DN: Should governments incentivize large families, like Hungary recently did, offering special loans, payments and tax exemptions for women who have multiple children?

JI: We believe that governments everywhere should, as much as possible, make it easier for people to have children. That’s not a question of population growth and population decline; that’s just good social policy, especially policy that helps women to remain in the workforce and to not sacrifice a career because they decide they want a child.

Parental leave programs, assistance for day care, direct child support payments — these are all things that governments can and should do to make it easier for couples to have children if they want to, but we don’t believe it’s possible (to improve fertility rates) with supports. The evidence around the world is that it just doesn’t work. No government anywhere has successfully been able to get fertility rates back up above 2.1 percent, which is the replacement rate. They can get it up a bit, but they can’t get it up that far.

DN: You examined what’s going on in Florida and in countries where a marked decline in birth rates is occurring. Utah, however, consistently has the highest birth rate in the United States. Do you predict a birth rate decline here, or will Utah be an anomaly?

JI: Within any given country, you are going to have some differentiation in fertility rates. Essentially, the more urban the society, the lower the fertility rate. The more rural you are, the more likely you are to have kids. But overall in the United States, birth rates are declining everywhere among all groups, regardless of what demographic you come from. In the future, the United States, like Canada, will only be able to grow its population to the extent that it brings in immigrants.

DN: In the United States, immigration is a volatile topic, and in light of that, this recommendation may be construed as you and your co-author making a political statement. Are you?

JI: We don’t think so. We fully understand that the debate over immigration is a very hot-button issue. It’s a hot-button issue in the United States, it’s a hot-button issue in Europe, it’s controversial in Canada and it’s heavily debated in Japan. Japan lost 450,000 people last year; their society is losing population at a rapid clip, and unless and until they begin to accept immigrants, their population will decline and their economy will stagnate, which it has been doing now for a few decades.

So we fully understand that you can have a debate in France or Bulgaria or the U.S. over whether you want to absorb the demographic and cultural impact of immigrants. All we’re saying is, look at your birth rate. If your birth rate is below 2.1 — and in every developed society in the world, it is — then you have a choice to make. You can either accept a decline in population — and that means a declining number of young people, a declining number of workers, a declining number of taxpayers to support older people with their health care and pension needs — or you bring in immigrants. It’s not a political question; it’s a demographic question. It has political consequences, sure, but the facts are the facts.

DN: You talk about economic factors that are driving the trend, but what about the decline in religious practice and growing secularization? Is this contributing to lower birth rates as well?

JI: There really is only one huge megatrend, and other trends get subsumed within it. The megatrend is urbanization. Everywhere in the world, people are moving from the countryside to the city. When people move from the countryside to the city, four things happen. First, a child ceases to become an economic asset and becomes an economic liability.

” One or two kids is already the norm; and a lot of people have no kids at all — they just get a dog. ”
Author John Ibbitson

Second, when a woman moves from the countryside to the city, she has access to education — to schools, to media, to other women. Educated women become empowered, and empowered women demand control over their own bodies. And when a woman has that control, she generally decides to have fewer children than her mother had.

Third, all religions, at least in their traditional forms, subordinate women to men, encourage women to marry, have children and care for their children and husband. In a city, the power of religion wanes. We see that happening throughout the world.

Finally, moving to the city erodes the power of the clan. In the village, your extended family is all-important, and your aunties urge you to settle down, get married, have children. In the city, your friends and co-workers become paramount. When was the last time a co-worker urged you to have children?

DN: A few decades ago, some people thought parents with 10 children were overdoing it. Now, in America, families with four or five children seem extreme, and among millennials, you note that the birthrate is now 1.0. In the future, what size family will be considered freakishly large?

JI: It’ll be three. One or two kids is already the norm; and a lot of people have no kids at all — they just get a dog. Once you have a society where you have low fertility, it becomes the norm, although you’re always going to have some people who make decisions outside of the norm.

DN: You have said that the population situation in China is “dire” because of its one-child policy, which was only discontinued in 2015. Will population changes affect U.S.-China relations within the next few decades, and if so, how?

JI: We think it could. Everyone is working on the assumption that China is in a period of sustained growth, but at 1.5, they’re half a baby short of the replacement rate, and in the next few years, China is going to start losing population. The challenge of the 21st century might not be handling China’s growth; it might be handling China’s decline.