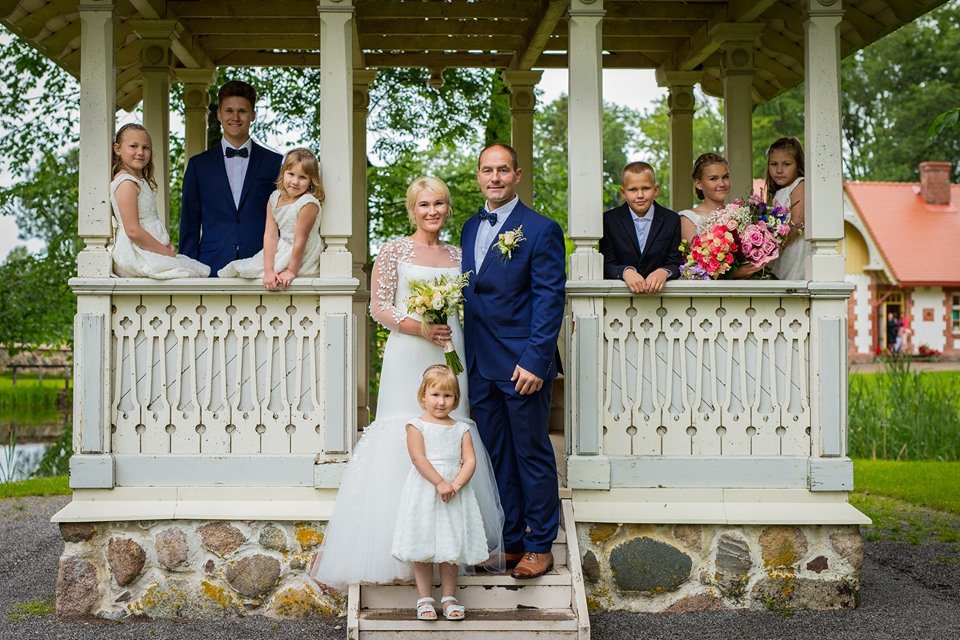 Award winning family announcement was done during the General Assembly of ELFAC in Prague on 22th October. The Aan family was nominated for the European Large Family of the Year 2022 Award by NPO, the Estonian Association of Large Families. This was their presentation:

The Aan family is a role model for the entire Estonian community of large families, and we believe that their contribution to long-term volunteering at both community and national level deserves recognition, and that their enthusiastic work is an example to the international community.

The Aan family is a family of 9 from South Estonia. Janne, the mother, and Peeter, the father, are married and have 7 children aged 6-22. They live in the countryside in a beautiful place in a house they built. The eldest child is already an adult, while five children attend Elva Gymnasium and the youngest child, aged 6, is starting pre-school. The family also has a 10- year-old four-legged furry friend, a Tibetan mastiff called Bella. The Aan family was named Estonian Large Family of the Year in 2016 and also the sportiest family in Tartu County.

Peeter has been involved in sports from an early age, doing competitive sports (bodybuilding, strongman competition) and organizing competitions for the last 20 years. Today, the entire Aan family is involved in the organization of competitions. For the last 6 years, they have organized several series of competitions, which are unique in Estonia. In addition, Peeter is well respected in the local community, and 4 years ago, under his leadership, he started the Jõusport Sports Club, which offers strength training for children, young people and adults. Today, training sessions take place in four different schools in Elva Municipality and the whole family is involved in the club’s activities. In 2021, Peeter was awarded the title of “Elva Spordihing” (“Elva’s Sports Personality”) and has also been a member of the Elva Municipal Council.

Janne has devoted much of her life to raising children. For the past 6 years, she has been in charge of Tartu Pereliit, Estonia’s oldest and now also the largest association uniting large families, which currently includes over 780 families. While during the first years, Janne contributed to the work of the association as a volunteer, for which she was among the nominees for the Estonian Volunteer of the Year, today it has become Janne’s main job. In addition to this, Janne has been a member of the board of the NPO Estonian Association of Large Families for the last 5 years and has been responsible for the area of collective events. On a day-to-day basis, Janne is also in charge of Jõusport Sports Club. This year, Janne initiated the founding of Jõusport Naisteklubi (Jõusport Women’s Club). Three years ago, Janne began writing poetry and today she has a collection of poems in her drawer full of poems about love, life, moments, family and loved ones.

The eldest son of the family, Sten-Anders, has graduated from high school, completed his military service and is currently working. Eldest daughter Janeli is in the 11th grade at Elva Gymnasium. Janeli graduated from both primary school and grade 10 with honors. Janeli has been active in competitive sports for many years and has brought home several Estonian championship titles in both lifting and classic lifting. Today, Janeli is also an instructor in a children’s training group and advises the women of the Women’s Club.

The rest of the children in the family, 15-year-old Sander, 13-year-old Johanna, 11-year-old Jolandra-Lisanna, 9-year-old Johandra and 6-year-old Janete-Aleksandra, are also involved in sports and are coached by their father Peeter and older sister Janeli. All, except the youngest child, have already brought home trophies from several lifting and classic lifting competitions. The children also compete in family-organized competitions. Janeli and Sander were named Elva’s best young athletes in 2021. Janeli is also one of the 100 young achievers of Elva in 2022.

In the Aan family, the most important thing is love and sticking together, for better or for worse. Collaboration is also very important. With a large family and busy lives, the Aans have built their own home from the ground up. Today, they have been able to enjoy their home for nearly 11 years. Thanks to the father’s skillful efforts, most of the building work has been done by himself with the help of the rest of the family.

For Janne and Peeter, it is very important that children can grow up in a loving and safe environment, where they love each other unconditionally.