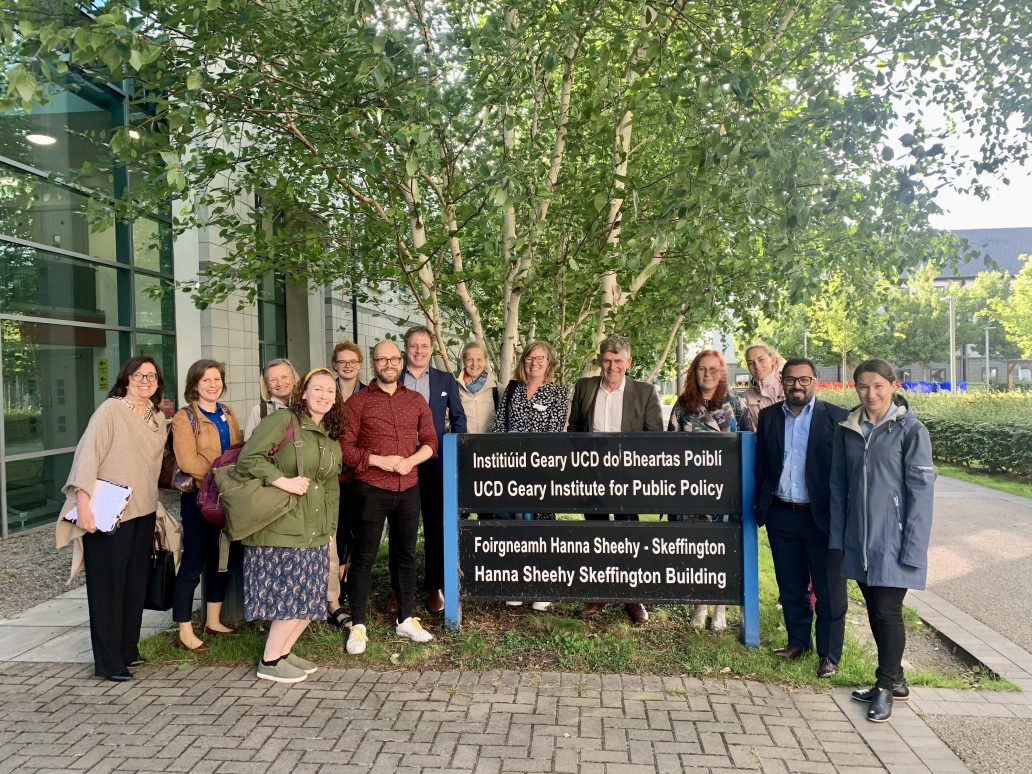 The president and the secretary general of ELFAC, Regina Maroncelli and Raul Sanchez, were attending the meeting in Dublin on 8-9 June, 2022.

They are the first to wonder how it is possible that the family model of those who have more than two children has remained practically ignored by scientific research, sociology, psychology, economics, demography. Apart from very few studies, often dated and focused on marginal aspects such as the differences between the first and the last born, those looking for documentation on the specificities of large families were bound to be disappointed: “We have been saying this for years, families with more Fiji, which, although they have represented normality for centuries, are invisible and this certainly has not served to support our reasons “says Regina Maronceli, president of Elfac, in Dublin for the first international Workshop dedicated to large families organized by a university institution, the University College of Dublin – Geary Institute for Public Policy – in collaboration with the Center for Poverty and Social Policy of Columbia University in New York .

About twenty scholars gathered in Dublin for the two days on the theme “Big families, putting large families back on the political agenda”: from Estonia, Qatar, Germany, Great Britain, Italy, Lithuania, Ireland to remove large families from invisibility starting from the very definition of a large family.

“In reality – says Stephen Koppe, of the University College of Dublin – we have not reached a final decision on the number of members of a large family … three, four children … .. What we have understood, however, is that there is a big gap to be filled by the academic world, with an in-depth study. The results of these two days will be taken up and integrated by other contributions that we will publish in a monograph entirely dedicated to the large family that should see the light in 2023 ”.

An international conference, organized by the network of researchers created in Dublin, should also be held in 2023. “If we look at it from the point of view of mothers, only a small part of women have many children: if instead we change the perspective and we put ourselves from the point of view of children, we notice something extraordinary: in Europe more than one child out of three lives in a large family, even if these represent around 14% of the population with children “.

The professor. Fayhey, a sociologist at the University College of Dublin starts from this consideration to ask for more attention to the phenomenon of large families. Starting from the poverty factor: the child “risk factor of poverty” affects above all households with three children, “punished” and penalized only for having more siblings than the “norm”. “We are victims of an unwritten rule – underlined prof. Martin Bujard, of the Federal Institute for Population Research in Berlin – the two-child norm: in the media, in house construction, even in children’s books, the family is one with two children, usually a boy and a girl. And whoever dares to transgress the rule is subject to a widespread social stigma, which perceives the large family as antisocial even if people, personally, do not think so at all “.

The comparison touched on many aspects of the family reality, with a particular focus on the situation in Great Britain, struggling with a controversial welfare system (the “law of two children”) which excludes from social benefits those born beyond the second child. The demographic issue, on the other hand, moves the policies of other countries that see the large family as a resource to reverse the birth rate. “We are happy that the university has finally” discovered “our reality – said Regina Maroncelli, president of Elfac, who spoke at the conference with the general secretary Raul Sanchez – we will have the opportunity to produce those data and research that is needed to give strength to the our demands for justice and fairness: in these two days a word has recurred with alarming frequency: “punishment”. For some strange reason, society tends to punish those who have more children, instead of supporting the future of the community, as if children were a private property of the parents. It is unfair that only the rich can afford to have the children they want.

The situation of large families – it was also emphasized here in Dublin – is particular and can easily fall into poverty, but this does not mean a lack of a sense of responsibility on the part of parents, but rather of a very particular need of families to be put in place. condition of raising one’s children without obstacles and penalties “.