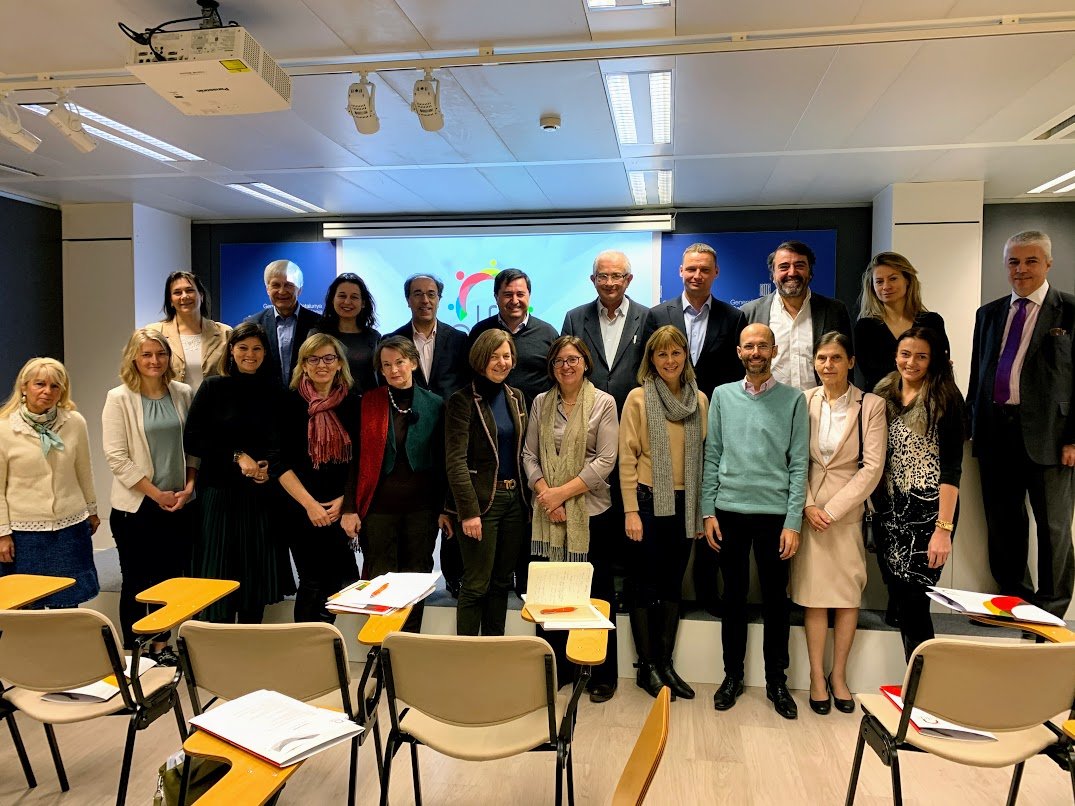 The General Assembly of the European Confederation of Large Families was held on Wednesday, November 20, 2019, the day after the First European Convention of Family-Friendly Municipalities, at the headquarters of the delegation of the Government of Catalonia in Brussels, which lent generously the room. The general assembly was attended by representatives of associations members from Croatia, Estonia, France, Germany, Greece, Hungary, Italy, Latvia, Lithuania, Poland, Portugal, Romania, Slovakia, Spain and Ukraine.

Regina Maroncelli, president of ELFAC, welcomed the representatives of the assembly and highlighted how the growth of activities since the last assembly needs an effort to distribute the tasks among member associations.

The secretary general Raul Sanchez reported the activities carried out since the last general assembly, held in June 2018 in Szczecin (Poland). He highlighted how the events and conferences in which ELFAC has participated (three or more each month) have multiplied, as well as the support given to activities carried out by national associations.

Regarding the projects underway Raul Sanchez referred to the European Network of Family-Friendly Municipalities, which has successfully developed all the objectives planned for its first year; and to the European Large Family Card, which has been postponed until finding the necessary resources for its start-up. The new website of ELFAC was launched on February 2019, the feedback is being very positive as with the monthly newsletter. The European Large Family of the Year Award is also consolidated, this year was its 5th. edition. He also referred to the campaign on the occasion of the European elections last May to bring our demands to the different political parties in each country.

New projects for the next term are the ‘Papers of ELFAC’, as an initiative to disseminate data and arguments of interest on large families; the organization of a conference at the European Parliament on the situation of large families; the launch of the second European survey on large families; the X European Congress of Large Families, with the ceremony of ELFAC awards; and the strengthening of the celebration of International Siblings Day. Consultative status was also requested for ELFAC in the United Nations Economic and Social Department (ECOSOC) in New York, whose response will arrive in May 2020.

Kata Gyurko, president of the Hungarian association of large families NOE, presented the X European Congress of Large Families, which will take place next to Lake Balaton (Hungary) in 11-12 July 2020, with many activities for families.

Elisabeth Müller, president of the German association, introduced the attendees in the main data of an analysis of large families in her country, conducted by the Konrad Adenauer Foundation. Cristina Pérez, from the Spanish Federation of Large Families, presented the results of the sixth national survey of large families conducted in her country with interviews with more than three thousand associated families. Both studies aroused great interest among the participants to be able to reproduce them in the different European countries.

The session on reports of some initiatives carried out by the member associations this year was attended by Aleksandra Januszewicz, from Poland, who introduced participants to the winning family of the European Large Family Award of the Year 2019, the family Brodów, with eleven children dedicated to the music and singing. Subsequently, Ivan Malbasic, from the Croatian association, made a presentation on how in two years a new association can position itself as a reference in the country, as the one he chairs, Obitelji 3 Plus, has achieved. Dimitris Stamoulis, from the association of Greece ASPE, explained the launch of the European Network of Family-Friendly Municipalities that his association organized at its headquarters in Athens, and the request of the first Greek municipality, Alimos, to join the Network. Getter Rang, from the Estonian association, presented the development of the discount card for members in her country, which has been carried out in a very professional manner and already has hundreds of collaborating companies. Finally, João Oliveira, from the association of Portugal, reviewed the activities carried out by his association and the challenges for the future.

The General Assembly finished with the intervention of a guest, Ignacio Socías, Director of communication and international relations of IFFD (International Federation for Family Development), who spoke about how to advocate for the family in the international arena, and the challenges that we could meet to represent large families in international organizations, such as United Nations.

After the speech of Ignacio Socias, participants of the assembly watched a video salutation from Alex Fung, the president of the Hong Kong Large Families Association (HKLFA), and his wife. HKFLA is the first large families association in Asia which was founded with the support and experience of ELFAC. They invited everybody to the First ‘Large Family Talent Show Competition’ that HKLFA is organizing next 21 December in Hong Kong.

Photos of the General Assembly