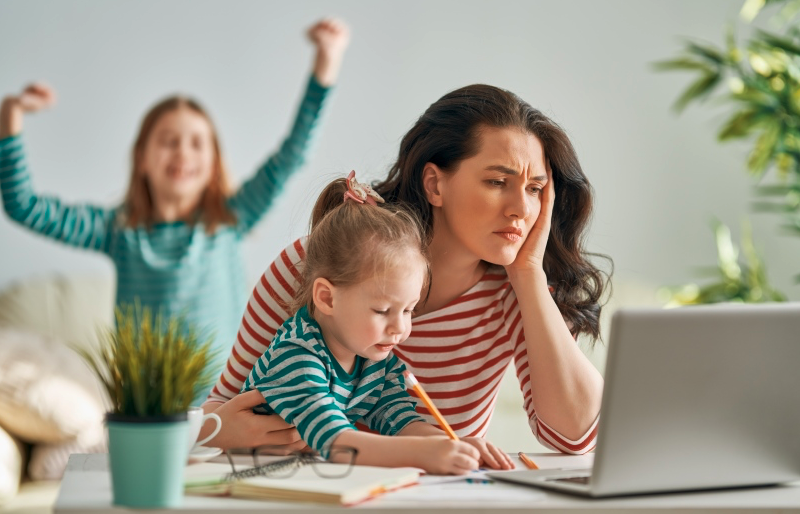 “Are you taking care of the kids today?” During the last few weeks this has been a fairly frequent question among those parents (even more so in the case of large families) who have been faced with the unexpected obligation of helping their children in their virtual classes, managing their homework, attending to telework and, in addition, covering the housework. All at once. This is a large-scale social experiment and only with the passage of time will we be able to analyse the results and their consequences. It is an exceptional and extreme situation at the same time, which has pushed many families to unsuspected limits. From an emotional point of view, some parents who traveled a lot confess to having “discovered” their family, with whom perhaps before they only crossed paths on weekends. Some mothers have suffered much more. They have been faced with an unexpected identity crisis: why is it now my turn to cook and do homework with my five children instead of preparing for my thesis?

This poses several challenges. The most basic is the vision of what has been called “Equally Shared Parenting”. This is the title of a book written by Marc and Amy Vachon ten years ago. They explain that it is not about dividing up tasks but rather sharing them, which requires parents to communicate more about their understanding of what parenting is all about.

In the face of the digitalization of education, a basic challenge is again posed, which consists of collaboration between parents and teachers in determining educational objectives. These go beyond merely transmitting knowledge because we cannot forget that education also involves instilling skills. And all this requires parents and teachers to exchange ideas about students, to know them better and to help them more effectively, which is even more necessary in a digital context. Verena Pausder, a mother of three, is one of the most active voices in Germany (20,000 followers on LinkedIn) about the challenges of digitisation, both for education policy and for parents. She advocates the need to provide devices and better WiFi connections for families, to promote a renaissance of creativity, to train teachers and to better equip schools.

Not few women have seen in the current situation a return to the past and regret the loss of the rights acquired by well-understood feminism. It is true that if the 20th century was characterised by the massive entry of women into all professions, I think that the 21st century should be characterised by greater collaboration between men and women in all aspects: in the home, as an employer and as an educator. A few days ago I spoke to a Lufthansa airline captain, the mother of two daughters, to inquire about the situation of her company. A woman who flies an Airbus to Hong Kong commands a lot of respect. I have heard from imbecile men who dare to claim that they would not get on a plane piloted by a woman.

In an interview in 2007 with the current President of the European Commission, Ursula von der Leyen “Wir müssen unser Land für die Frau verändern” (We must change our country for women), a surprising phrase is quoted: “the pressure from industry to bring women into the workplace is enormous. What we do not know is whether she will want to have children’. For this reason it is essential to highlight the fundamental role of the mother and motherhood in society. Their contribution must be recognized, including economically. It is paradoxical, and in many cases real, that two salaries are needed to support a family. Family policies play a very important role. Not few women have had to take leave during these weeks to attend to the needs of their family and home, especially if the nursery was closed. In Germany the state has covered the wages of these women.

One of the most competent voices in this area is that of Janina Kugel, former member of the Human Resources department of the Siemens group: she rightly regrets that women have borne the greatest burden in achieving a balance between profession, home and education.

What can we learn from this experience, and is it permanent? IESE Prof. Mireia de la Heras believes that the digital revolution in teleworking has come largely to stay, and specifically recommends: creating physical and psychological limits to achieve a work environment at home, encouraging routines to be more effective, starting work early and maintaining a good flow of communication with both work and family environments. It also bets on flexibility, generosity, initiative and an optimistic temperament as the skills needed to navigate in the immediate future.