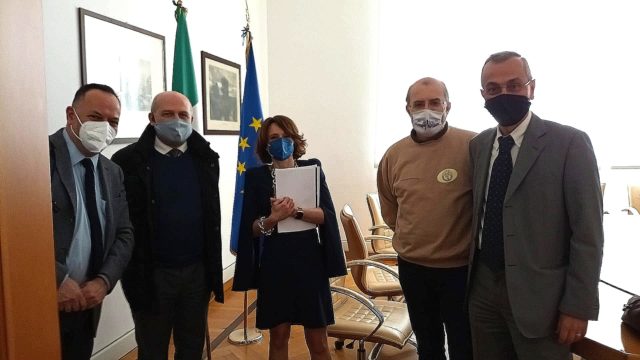 A delegation with President Mario Sberna, Carlo Dionedi, Alfredo Caltabiano and Paolo Moroni was received by the Minister on 15 April in Rome, together with a number of staff.

Before talking about the single allowance, we mentioned two fundamental aspects: from 2005 to 2020, absolute poverty among large families rose from 3.8% in 2006 to 20.7% in 2020; at the same time, fewer and fewer women are having more than two children. This is a strong reason to invest positively and significantly in large families.

With regard to the single allowance, there are many obscure points and many fears. Starting from the fact that the delegated law enlarges the number of beneficiaries: this is a positive thing in itself, because self-employed workers and those with no income will also receive the allowance.
But if the number of beneficiaries increases, the resources allocated to the single allowance must increase, and by a lot. But even the Minister recognises that if the allocation is not increased, many families will not have real benefits and will have to resort to the safeguard clause, which so far is only a promise, but does not yet exist in the legislation.

This is a discordant note, which it is to be hoped that the government will remedy in the implementation decrees. In fact, any father of a family knows that, if the food available is always the same, but the number of mouths to feed increases, it will be necessary to favour and protect the most fragile children. And citizens expect the same from the State.

The Minister pointed out that the single allowance is part of a broader reform, the Family Act, which will also support families with children with other instruments. Moreover, all this will be combined with the reform of the tax system envisaged by the Government.

We also talked about the Family Card and Citizenship Income.

For the former, we asked for involvement in relaunching this instrument, which is currently underused. We will have a new meeting soon.