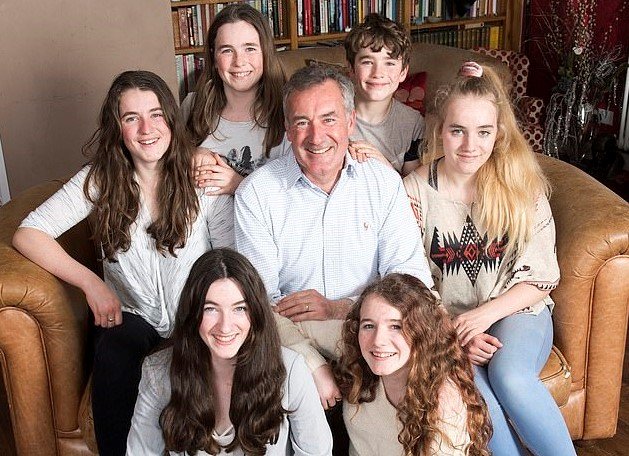 As a father-of-six, I know that multiple children are a great blessing both to society and to their relatives, so ignore the critics, writes Colin Brazier

To all appearances, I don’t have much in common with Dr Yoni Birnbaum. He’s bearded, I’m clean shaven. He’s Jewish, I’m Catholic. He’s married, I’m widowed. But sitting in his kitchen in Barnet, watching two of his five children playing with plastic bricks, I recognise a deeper kinship. Not only are Yoni and I begetters of big broods — I am a father-of-six — we are cheerleaders for the benefits of larger families, too.

Our meeting in 2019 was for a BBC documentary exploring the unfashionable case for family expansion. Afterwards Yoni, then rabbi at the Hadley Wood United Synagogue, put it better than I could in his column for the JC: “A family lucky enough to have two or more children creates future citizens who better understand what it means to think of others, rather than their immediate needs. There are always younger or older siblings to consider.”

Yoni and I believe that it could do with a push, the baby. As with pubs and retail, Covid has accelerated existing trends. Predictions of a boom in coronababies were way off. Britain, in common with many other developed nations, is experiencing a sharp new slump in fertility.

Lockdown means couples aren’t getting together and those who already have are delaying children because of The Uncertainty. But the virus is a catalyst, not a cause. Birth rates had tanked to an all-time low six months before the UK recorded its first case of Covid.

As with populations of other developed nations, the desire to be a parent is no longer a given for many young Britons. Childlessness has always been a personal tragedy for some. Now it’s also a widespread environmental or lifestyle choice.

This has got many people worried. In Israel, where I worked in the 1990s as a journalist for Sky News, I was always struck by the urgency of the demographic question. Recovering the lost millions of the Holocaust gave it an existential edge. But even things like peace-making were touched by it. The median age of Gazans is 18, the equivalent for Israelis is 30. A Jewish friend would ask: “Can you guess who’s more likely to compromise?”

Faith remains part of the equation. As the demographer Paul Morland, author of The Human Tide: How Population Shaped the Modern World, told me, it’s not so much a matter of religion as religiosity. “The Chassidic Jews in Israel have among the highest fertility rate of any people in the world, the secular Jews in America have among the lowest fertility rates,” he said.

Certainly, the Charedi have helped put Israel top of the West’s league table of fecundity. But just as Israel’s world-beating vaccination programme is an outlier, so is its cultural, political and social support for large families.

Which isn’t to say that the rest of the developed world isn’t worried about a birth dearth. The response in some countries has been to subsidise baby-making. It works a bit, as do appeals to God and Country. But they can feel top down — old men telling young women how to lead their lives.

In countries which don’t have Israel’s specific pro-natalist environment, a new approach might be overdue. One which sees parenting as a progressive cause, not an atavistic habit. That’s about marching behind — not athwart — a banner of reproductive rights. In the 20th century, this meant giving women a choice to have smaller families. Now it means not the reverse, but supporting the option of women having all the children they want.

Research shows nearly half of Western women currently don’t do this. In Britain the estimated ‘baby gap’, between the number of children women want and the number they are actually having, is likely to be more than 100,000 a year. Were those children born, the UK’s fertility rate would reach replacement level. The staffing and funding of our public services would be future-proofed.

But, to me at least, that greater good is of secondary importance. All too often, demographic debates focus on graphs — on the viability of welfare models, on the desirability of avoiding a populist backlash against immigrants by boosting ‘indigenous’ birth-rates or, indeed, on replacing those murdered by the Nazis.

However, Israel aside, I believe the focus should not be on the value of children to the state. Not even to their parents, but to other children.

In spite of assertive contrary voices, there is a growing body of research demonstrating that — generally speaking and all other things being equal — a brother or sister is good for a child. They help them cope better with disruptive events, like the disappearance of a parent (true at whatever age that happens). More significantly, siblings are less prone to the epidemics of modern childhood — mental illness, bullying and eating disorders. Having grown up in a culture where these scourges are endemic (and may have worsened dramatically during lockdown), our Millennials may be more receptive to the idea of radical counter-measures.

Of course, some will recoil from what they might see as another tiresome assault on the only child and “snowflakes”. Many will see no causal link between growing up without siblings, the helicopter parenting that invites, and a sense of unearned entitlement. But others, those who yearned for a childhood confidante in the flesh and not on a smartphone, may think that when it’s their turn to choose a family, the more will be merrier.

I believe the case for siblings is strong, if undernourished. It’s a positive argument. But is it enough to sway that growing cohort of young westerners who say they don’t want a child — never mind a child with siblings — lest the planet suffers? How do you even start to debunk an argument advanced by a no-less sainted figure than David Attenborough?

First, global overpopulation should be shown for what it is: a temporary function of historic demographic momentum. A young Briton will be around to see humanity shrink, as even sub-Saharan Africans embrace smaller families. They will certainly see the crippling effects of depopulation in a majority of countries. Anyone under 30 will live to witness not only the impossibility of importing labour from developing countries which face their own demographic crunch, but the misery that increasingly accompanies disproportionate ageing in places like Japan.

Second, the role of resource consumption — and the cant that frequently goes with it — must be exposed. The number of people living alone in the UK recently topped 8 million for the first time. The environmental gains of smaller British families are being undermined by the fashion for solitary, — rather than inter-generational, living. It’s important to be sensitive to those who cannot have a family, while questioning those whose ideologically motivated childless lives are paraded as exemplars of green martyrdom.

And third, as with the Covid vaccine, messaging matters. I would love to see the case for large families reflect what it really is: a subversive and counter-cultural argument. I’d like to see a campaign with billboard posters and online ads asking awkward questions. “This Christmas, why not give your child the greatest gift — a sibling?” Or “Doesn’t grandma deserve grandchildren?” Maybe just, “O brother, where art thou?”

Of course, by behaving as if the decision to have children is part of a contest of ideas — no longer an iron rule of natural law — we open ourselves up to the rough and tumble of the culture wars.

And here I’m reminded of something Yoni Birnbaum said. Sometimes, when he and his wife Elishiva go out with their five kids, heads turn “disapprovingly”. For a growing number of Britons, a large family is not something to admire as an example of parental sacrifice and tangible optimism for the future. It is weird. Or worse — an act of environmental vandalism or religious fanaticism. It need be neither. And we need to learn how to say so.