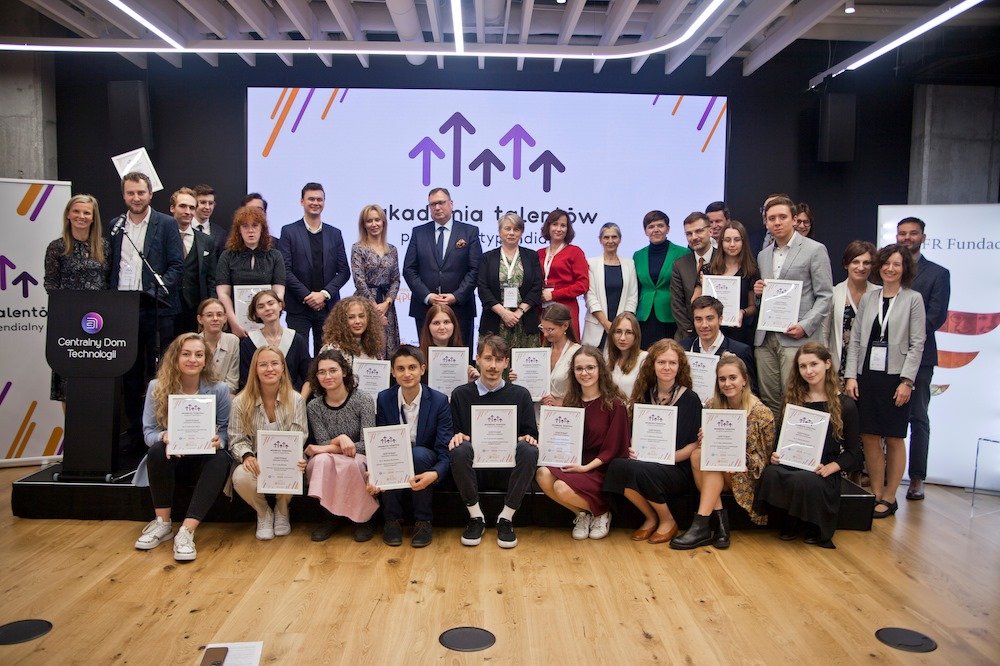 From 17 to 24 September, students of various fields of study from all over Poland met in Warsaw to train together and develop their competences. Wiktor, Marta, Tymek, Klaudia, Marlena, Oliwia, Kasia, Marta, Ewa, Zosia, Wiktoria, Weronika, Hubert, Wojtek, Michał, Marysia, Kasia, Franek, Teresa, Maja, Wojtek, Julia, Kinga, Mateusz – these are our future leaders, who in a few years will constitute the elite of the country.

The participants of the Talent Academy programme are young people from various cities in Poland who grew up in large families, are socially committed, achieve good results in their studies, and develop as volunteers. For six months, they took part in mentoring meetings with, among others, Prof. Gabriela Olędzka, Sławomir Mazurek, Dr. Łukasz Hardt, Prof. of UW, Dr. Paweł Dubiela and Artur Sójka. Students also received a financial stipend. The six-month online meetings ended with a week-long meeting in Warsaw. Young people saw each other in person for the first time and could talk about their passions and plans for the future.

In Warsaw, the young people had a very ambitious programme focused around six themes: media, talent, management, image, communication, team. Throughout the week, dedicated workshops were held in the morning sessions: the introductory networking session was led by Artur Sójka – a speaker, coach, author of a book and networking practitioner; the team building workshop was led by Michał Senk – a coach of leadership skills and director of the John Paul II Thought Centre in Warsaw; the DNA of Talent workshop, which was to facilitate the planning of one’s career path, was led by Magdalena Zalewska – a coach, mentor, manager, expert in talent development and discovery, and also a wife and mother of five children; the workshop on project thinking and management was led by Agnieszka Lissowska-Lewkowicz, President of the Volunteer Centre Association; a workshop on image building in social media was conducted by Rafał Ferber – an expert on corporations, founder of the fanpage “Mordor na Domaniewskiej”, President of the agency “Runaways – Social media & more”; Joanna Krupska – a psychologist, founder and long-standing President of the Association of Large Families Three Plus and Jakub Panek – a psychologist, trainer, psychotherapist – talked about the secrets of interpersonal communication; a workshop on the basics of public speaking was led by Maciej Wierzchowiec – co-founder of the Students’ Research Group of Oxford Debates at the University of Warsaw, organiser of numerous training sessions for young people on managing their own life and time, lawyer.

We ended the day with a meeting with a special guest from the world of media, culture, marketing or business. We talked to Michał Szułdrzyński – Deputy Editor-in-Chief of Rzeczpospolita daily, Dr Bartłomiej Biskup – specialist in political image, Łukasz Wojdak – Director of the Business Customers Segment Management Department of BNP Paribas, Colonel Konrad Korpowski – Director of the Government Centre for Security and Joanna Krupska.

We visited the “Invisible Exhibition”, the Presidential Palace, the Ministry of Family and Social Policy, and the headquarters of KGHM Polska Miedź S.A. The young people also had time for self- and organised integration (solving puzzles together in the Escape Room!). These meetings will surely remain in our memories for a long time.

The conclusion of the summer school was a festive Gala on 24 September in the Central Technology Centre. In the presence of sponsors, programme partners, guests and representatives of the Board of the Association of Large Families “Three Plus”, the young people received their diplomas from the Academy. We can only reveal that there were tears of emotion, as well as an unexpected and unplanned musical performance!

Despite the tight schedule, because, as you can see, it was not a “sanatorium”, the workshops and meetings with VIPs were an opportunity for many participants to get to know themselves better and to specify their further life plans. We know that they came home changed, full of positive emotions, with new acquaintances and energy to change their immediate environment. Wiktor, Marta, Tymek, Klaudia, Marlena, Oliwia, Kasia, Marta, Ewa, Zosia, Wiktoria, Weronika, Hubert, Wojtek, Michał, Marysia, Kasia, Franek, Teresa, Maja, Wojtek, Julia, Kinga, Mateusz – congratulations on completing the first edition of the Talent Academy!