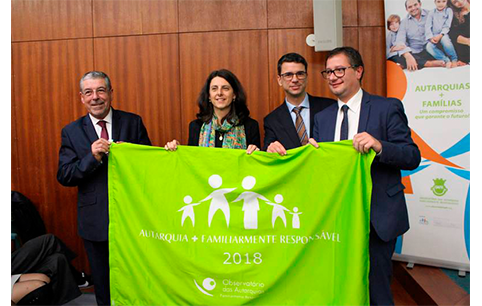 Seventy municipalities were distinguished for adopting effective policies to support families, a distinction awarded by the Observatory of Family Responsible Municipalities (OAFR).

The OAFR informed that 2018, with 130 municipalities, has been the year with the largest number of participants in its annual survey and that 70 of them were awarded with the “green flag” for effective family support practices.

Seven of the distinguished municipalities have been awarded with the “green flag” for 10 years from the beginning of this initiative, so this year they have received a special award. These are the municipalities of Angra do Heroísmo, Cantanhede, Torres Novas, Torres Vedras, Vila de Rei, Vila Real de Santo António and Vila Real.

According to Isabel Paula Santos, head of the Observatory, the distinction is justified because these Chambers “were absolutely innovative when they started supporting family practices,” such as “family water tariffs, school textbooks, free ATLs , transport networks and other initiatives that at the time were truly pioneering.  The districts with the highest number of distinguished municipalities were Lisbon (11), Coimbra (9), Santarém (7) and Aveiro (7).

The Observatory of Family Responsible Municipalities was created in 2008 by the Portuguese Association of Large Families and its main objectives are to monitor, award and disseminate the best practices of Portuguese municipalities in matters of family responsibility.

The ceremony of delivery of the flags to the municipalities awarded took place on November 21 in Coimbra.

Click here to see the photos of the ceremony