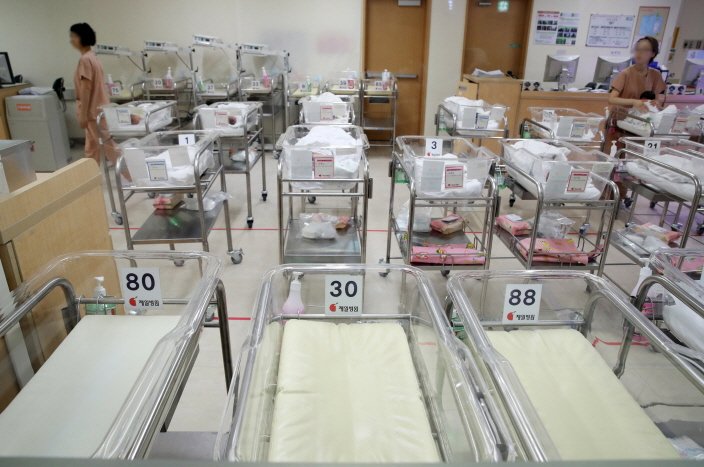 The total fertility rate refers to the average number of children a woman bears in her lifetime.

The 2018 figure is far below the replacement level of 2.1 that would keep South Korea’s population stable at 51 million. It also represents a sharp drop from the 4.53 in 1970, when the government began to compile relevant data, according to Statistics Korea.

“Total fertility rate of less than 1 is extremely low and it means the population could decline at a very fast pace in the next 30 to 60 years later,” Kim Jin, director of Statistics Korea’s vital statistics division, said in a briefing in Sejong, an administrative hub located 130 kilometers southeast of Seoul.

South Korea is the only country among members of the Organization for Economic Cooperation and Development where the total fertility rate fell below 1, Kim pointed out, though there are no OECD data on 2017 and 2018.

Hong Nam-ki, the minister of economy and finance, expressed concerns about the record-low fertility rate, saying a decline in the working-age population is a significant burden and a worrisome trend.

Moody’s Investors Service said in an October report that in the coming decades, South Korea’s potential GDP growth will gradually decline towards 2 percent annual growth, as decline in the working-age population diminishes the contribution of labor to overall growth.

The decline in childbirths is blamed on a sharp fall in the number of marriages and a growing number of women who are unmarried in recent years.

The number of people tying the knot hit a record low of 257,700 in 2018, marking the seventh-straight year of decline.

Some young South Koreans are opting to distance themselves from life’s three major milestones — dating, marriage and having children — because they cannot find decent jobs amid a prolonged economic slowdown.

Other factors are the high cost of private education for kids and skyrocketing real estate prices, as well as the difficulties women face in finding jobs after spending extended time away from work to raise children.

Yoo Sang-hyun, a professor of social studies education and a demographer at Kongju National University in western South Korea, said the prospects of South Korea’s population are not bright.

“Total fertility rate of lower than 1 means that the population could decline at a faster pace,” Yoo said.