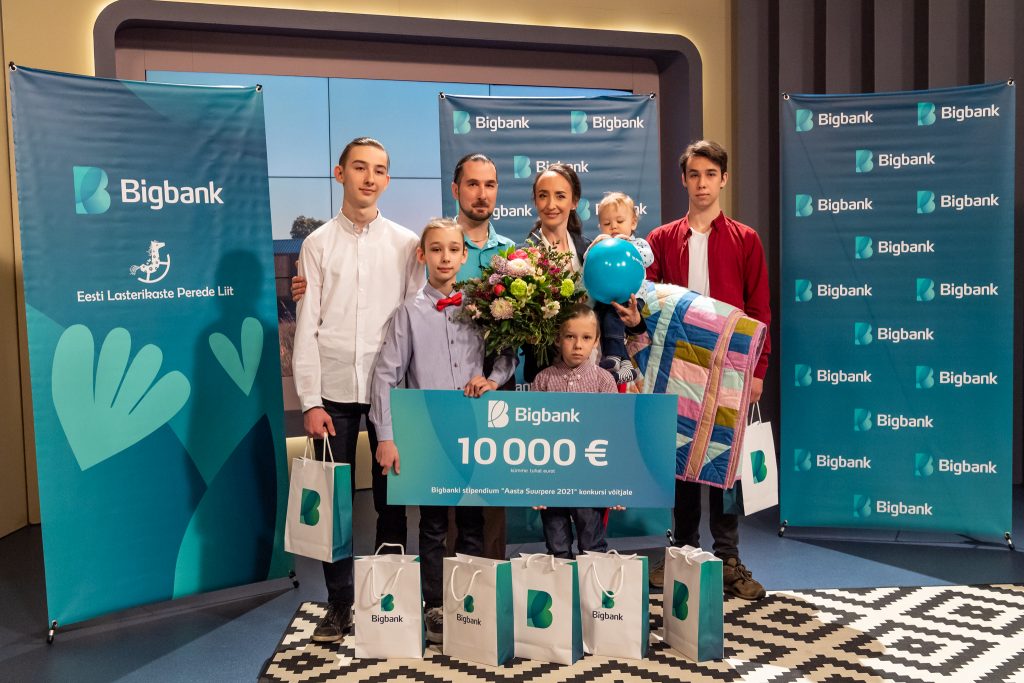 This year, the Estonian Association of Large Families has announced the Gužov family, of five children, as the Great Family of the Year, who are building a home in Vihterpalu themselves and are real examples of coping with change. The winners of the competition will be supported by Bigbank with a scholarship of 10,000 euros.

The Large Family of the Year includes mother Lora, father Andrei and children – 17-year-old Radomir, 15-year-old Vlademir, 10-year-old Miroslav, 5-year-old Yaromir and one-year-old Svetomir. The family recently moved from the city to Vihterpalus, where they build an ecological home with their own hands, keep their favorite comets, quails and bees and want to promote local life.

According to Aage Õunap, President of the Estonian Association of Large Families, this year the jury chose the Gužov family as the Great Family of the Year primarily due to their positive attitude towards life and enormous willpower. “The Gužovid family is a perfect example of how everything starts with an attitude,” said Õunap. “It is admirable with what enthusiasm and commitment they face new challenges, how caring they are for other people and the environment, and how diverse and sympathetic they are as people,” Õunap added.

According to Jonna Pechter, the head of Bigbank Estonia, the Gužovite family is overworked, active and truly inspiring. “Gužovs are building a very special and nature-friendly home, children have many hobbies and interests, and their mother dreams of a ceramic studio to offer hobbies to her and her toddlers. We hope that the 10,000-euro scholarship will help them get closer to their dreams, ”said Pechter.

Pereisa Andrei works as a psychologist in Tallinn Prison. According to Andrei himself, he does not see his family as an idyllic example on the front cover of the magazine, but as an ordinary family with its own difficulties and many challenges. “What sets us apart from others is the diligence and the fact that when we face challenges and difficulties, we do not grumble, but always try to solve them peacefully, matter-of-factly and creatively and move forward with our lives and dreams. One of the motto of our life is – there is no such thing as a problem, there are only challenges that need to be solved and valuable experience, ”says the father. In addition to his interests, the father also creates an assistance program for people who quit smoking and, together with the Tallinn Family Center, supports an anti-violence counseling group. Andrei considers building the biggest home for his family to be the biggest challenge so far. “Our dream is to build a home and a garden with our own strength, which would be a place with a special bond for children, where they can bring their children when they grow up, “said Andrei. “We are jokingly halfway through eco-countries or, in human terms, proponents of organic farming. We try to cope as naturally as possible and reuse both in the household and in the cultivation of the land. Our house will also be ecological and energy efficient, “added Andrei. “Neighbors also call us working freaks, because we often work until sunset and after the flashlight. We learn by building ourselves and we also share this wisdom with children. “ There are quite a few animals in our household: two cats, a dog, six bee colonies and quails. The most exciting thing right now is dealing with bees, which for us is like getting to know aliens. Bees are important to nature! Without them, the land will not bear fruit, “says Andrei.  “

Andrei names his wife Lorat, who is educated as a social worker, “Creative soul” because she is a woman that has so many different artistic interests that she tries to realize alongside raising children and a large household. Loral has various exotic instruments, from ukulele to Kalimban at home, and she likes to draw. Lora is a soulful gardener-collector. If he had the opportunity, she would set up her own botanical garden. According to Andrei, everything that Lora puts in the soil grows and bears fruit. “He has repeatedly saved the withered so-called trash candidates – by asking for such an unfortunate throwback, he brings home, takes care of a little and usually the awakening plants come to life and make the eyes happy,” says Andrei. Moving to the countryside, Lora became interested in ceramics. His dream is to make his own pottery studio and offer himself and also the children of the village hobbies that the country has little to gain. Lora is currently building a small workshop for the family,

The family’s oldest son, 17-year-old Radomir, is currently studying at Tallinn Construction School. He and his brother Vlademir have been engaged in a dance competition, but while living in the countryside, Radomir became interested in crafting. He plans to become an architect in the future. To this end, he wanted to get to know his future field from the “foundation” and to better understand the soul and design of houses while working as a builder.

Vlademir , 15, is interested in computers and sees programming as his future profession. Vlademir, like the other children in the family, helps parents look after their little brother, do gardening, build the house and sometimes cook.

10-year-old Miroslav is a cheerful third-grader. He, too, often helps parents, likes family cats and is interested in beekeeping.

5-year-old Yaromir is the most energetic child in the family. He likes to play outdoors with his favorite family member, the cross-breed dog Stella, who is as energetic and cheerful as Yaromir.

1-year-old Svetomir is a nest egg . According to his parents, he is a very curious child who recently learned to walk and is now discovering climbing.