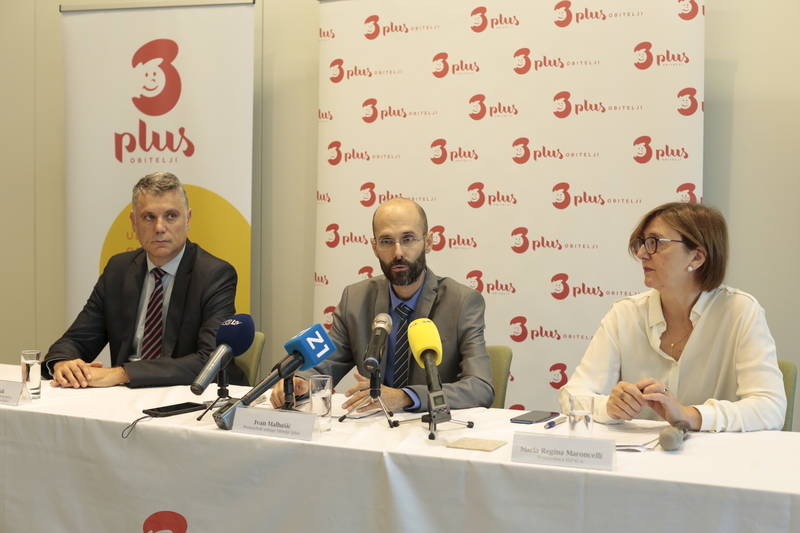 At the press conference held on Tuesday 16th. October the Croatian Association of families with three or more children (“Families 3plus”) was officially introduced to the Croatian public. This independent, non-profit, non-governmental, non-confessional and non-partisan civil society organisation was formed at the initiative of parents with large families. The association has attracted most of attention with its Family Card with discounts and special benefits for families 3plus, which makes their everyday life, in which they face many financial and logistical challenges, much easier.

The Family Card is a project developed in cooperation with a number of national and local partner companies which have recognised a market of more than 600 thousand people living in large families in Croatia today. By becoming a regular member of the association, families 3plus are given the opportunity to use special discounts and benefits offered by the partners of the Association, which include well-known national brands. Apart from providing discounts and raising the quality of life, the association aims to represent the interests of families 3plus by creating more affirmative environment without prejudice, stimulating scientific research on different aspects of their lives, organising workshops, building connections with the aim of providing mutual support, promoting corporate social responsibility among companies and having an impact on public policies.

“After consulting with each other, some of us parents of large families concluded that, without our self-organisation, the public and politics would never focus on the interests of large families, which amount to more than 112 thousand in Croatia. Such a model exists throughout the whole Europe and it is extremely successful,” said Mr Ivan Malbaši?, the President of the Croatian 3plus Families Association, at the opening of the press conference.

After introducing the Family Card, Mr Ivan Malbaši? invited the public concerned to get involved in the association’s activity.

“Together we can make a synergistic effect with multiple benefits for the whole society. Therefore, we invite companies showing interest in corporate social responsibility, experts who can contribute with their knowledge, and all families with three or more children to become a part of this project, each of them in their own way.”

Two important goals of the association have already been achieved, since the association has become a member of the umbrella organisation on the European level, ELFAC, and has also established a good cooperation with the Ministry for demography, family, youth and social policy. This was also confirmed by participation of the Assistant Minister, Mr Ivica Bošnjak, and President of ELFAC, Mrs Maria Regina Maroncelli, in the press conference.

Mr Bošnjak pointed out that the Ministry supports this initiative, since it believes that parents play a major role in creating family and youth policies, thus, their self-organisation is more than welcome. Moreover, raising the large families’ quality of life is thought to be crucial for demographic renewal.

Mrs Maroncelli introduced ELFAC to the public as an umbrella organisation for European associations of large families, and then she addressed the situation across the Old Continent.

“In Europe, one third of the families have no children. Large families make 13% of all families, and more than 30% of children come from those families. Certain countries believe that they can solve demographic challenges with migration, but in some countries, depopulation poses a major threat. Associations of large families have a key role in expressing needs and presenting solutions for creating a friendly environment for families.”

Both Mrs Maroncelli and Mr Malbaši? pointed out that they were not trying to convince anyone to have a large family, but their mission is to make lives of those who choose that option much easier.