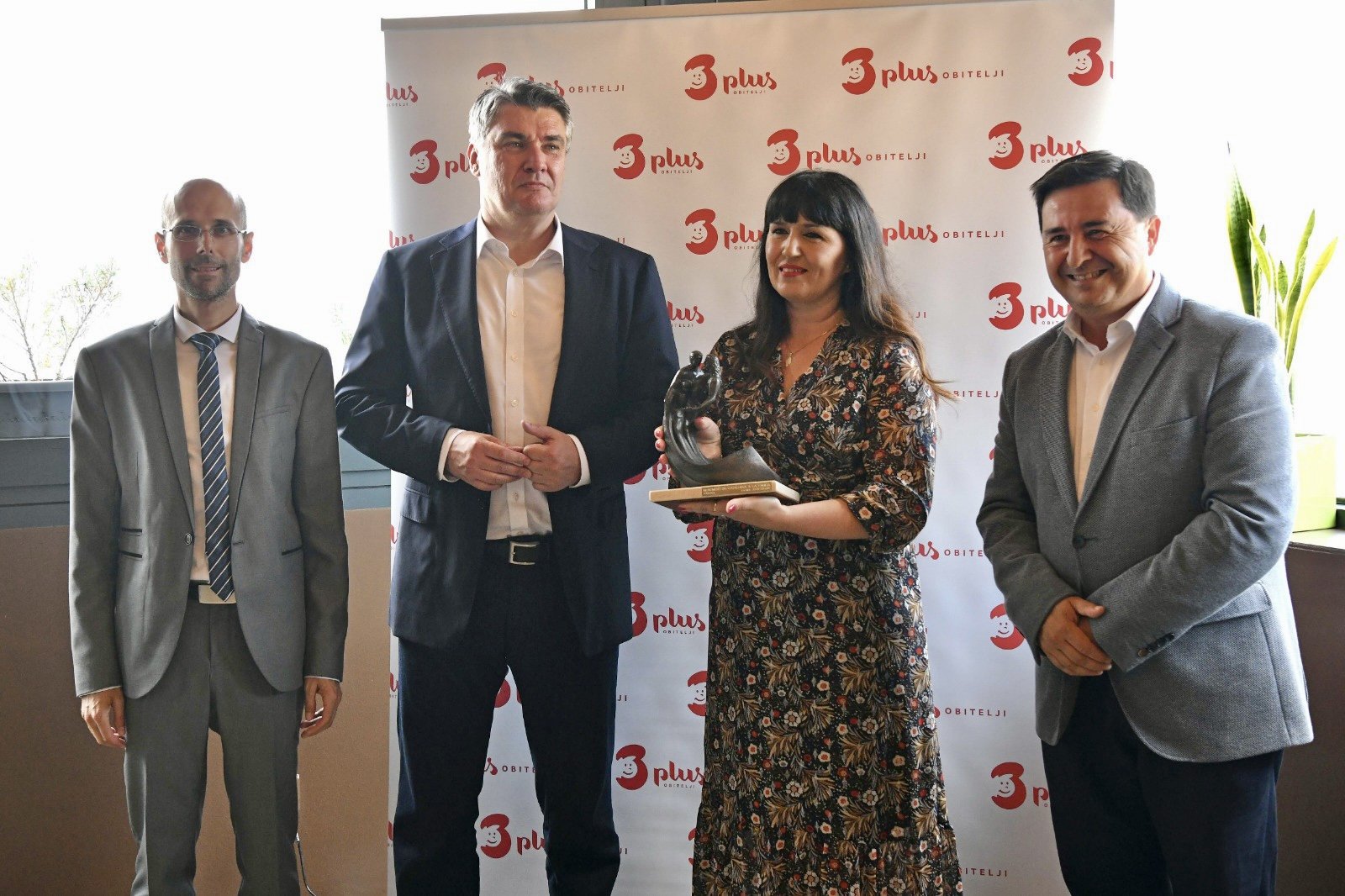 In Vrbnik on the island of Krk, the award for the European Large Family of the Year was presented by the European Confederation of Large Families (ELFAC) for 2020 to the Toljanić family from Vrbnik. The Toljanić family award was presented by ELFAC Secretary General Raúl Sánchez, and the ceremony was attended by the President of the 3plus Family Association Ivan Malbašić and a member of the Board of Directors of the Association Đurđica Mostarčić and the President of the Republic of Croatia Zoran Milanović.

The ceremony began with an introductory speech by the president of the 3plus Family Association, Ivan Malbašić , who, among other things, pointed out that the family has always been, is and will be the basic station of society. This was followed by an address by Raúl Sánchez , who compared the European Large Family of the Year award to the Oscar Film Award, noting that this award is a kind of Oscar for families. After the ELFAC Secretary General presented this valuable recognition to the Toljanić family, Katarina Toljanić , a mother of 12 children, who addressed the audience thanking on behalf of the whole family that her family is especially prominent at the European level.

Congratulating Ms. Toljanić on the award, the President of the Republic of Croatia, Zoran Milanović, said that he views families with more children primarily as a commitment of women and men to raising children. “It’s incredibly difficult. It used to be completely normal, and now to have more than three children, let alone twelve children, demands from parents in the world the expectations that exist from those children, an incredible not sacrifice, but commitment and dedication”, said President Milanovic. “What I’m here for is my fascination and admiration for the small number of people who have a lot of children. Because children are not a fad. Children are a commitment, an obligation, work, effort, a duty, so everything for which and how we want to see the community in which we live, specifically Croatia “, concluded President Milanović.

The Toljanić family was nominated for this prestigious award by the 3plus family association in October 2020, and the recognition by ELFAC arrived in November of the same year. The nomination letter states, among other things: “The story of the Toljanić family began in 1997 when Katarina and Franjo got married. The Toljanić couple believed in the power of family togetherness from the very beginning, and through their married life in 23 years of marriage they became the parents of twelve children: Kate (23), Stjepan (21), Ljubica (20), Zlatko (18), Marija (17). ), Franice (15), twins Michael (13) and Gabriel (13), Gaspar (11), Angela (8), Carmen (6) and Luce (2). Kate has already started her own family and her daughter Beata was recently born.”

The Toljanić family is also recognizable for the fact that they successfully run the family business. “The Toljanić family opened a restaurant in 1995, turned the cellar into a tavern, built a large winery not far from the vineyards, and in 2016 an impressive hotel dedicated to the vine. Katarina was a constant support to her husband, and among other things, she arranged their business premises in Vrbnik – Gospoja wine tasting room, pizzeria and tavern Žlahtina, luxury hotel Gospoja and wine shops in Rijeka. The Toljanić family has received a number of awards related to family business, and Franjo was named Croatian Manager of the Year 2018 in the category of small businesses”, it was stated, among other things, in the nomination letter. Despite the great tragedy that befell the family last year, mother Katarina continues to witness family values, and the memory of a prematurely deceased father will forever be kept in hearts and memories.

With sincere congratulations to the Toljanić family, the 3plus family association especially thanks the Secretary General of ELFAC Raúl Sánchez and the President of the Republic of Croatia Zoran Milanović for their presence and sincere and kind words to glorify the award ceremony for the European Large Family of the Year to the Vrbnik family Toljanić. We would also like to thank the partner of the 3plus Family association in the Family Card project, the company Fjok, which prepared a special gift package for the Toljanić family for this occasion.