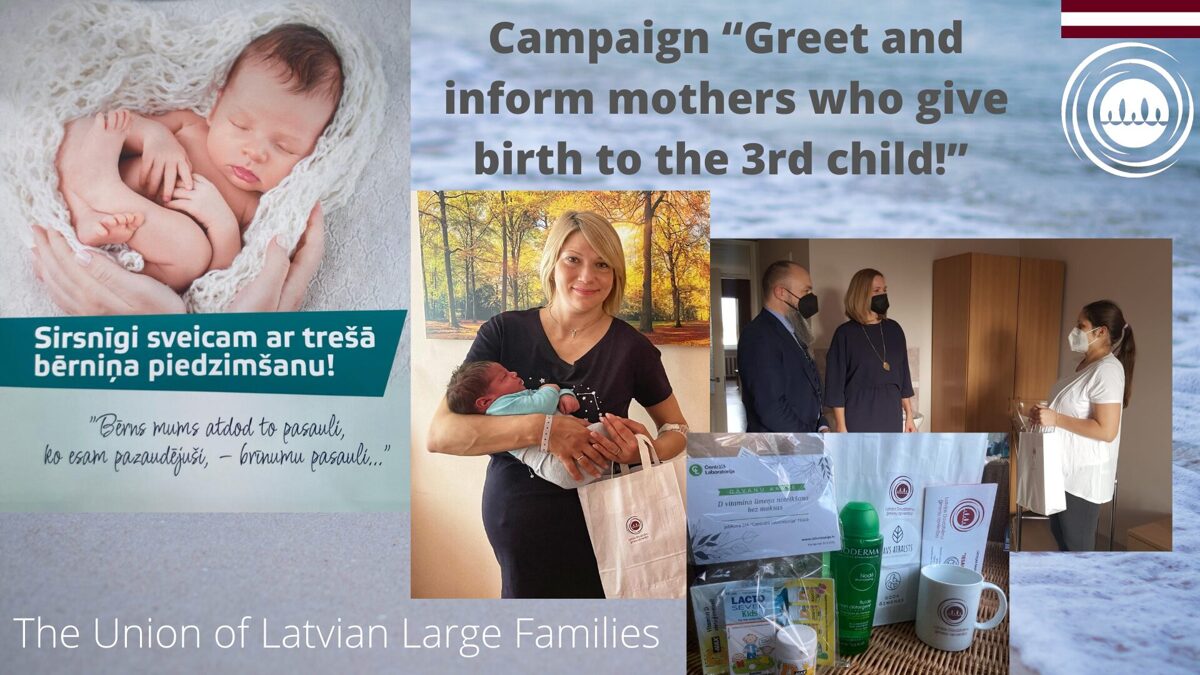 Not all large families are aware of the state support available to them. There are many differences among municipalities of Latvia in the types of support for large. Therefore, the Union of Latvian Large Families has launched a special campaign to inform families who have just welcomed their third child and have acquired a status of large families in a simple and understandable way about the support available from the state and municipalities.

“We believe that each mother of three or more children should be individually thanked for her courage. We believe that society and authorities should be more aware of the importance of large families and their significance on the development and sustainability of Latvia.”, said Elina Treija, chairman of the Union of Latvian Large Families.

Throughout 2022, in all 17 maternity hospitals every mother expecting her third child will receive a gift from the Large Families organization and the entrepreneurs supporting the campaign. The Union hopes that more entrepreneurs and even municipalities will join the campaign throughout the year.

The average number of children per family in Latvia is decreasing. Currently, the total fertility rate in Latvia is 1.6, far below the minimum 2.1 children per woman to ensure generational change. Therefore, every mother who dares to bring a third or fourth child into the world should be especially supported.

“Large families remain a social group at high risk of poverty and social exclusion. To defend the interests of large families, an active region-wide public movement is needed. This is why The Union of Latvian Large Families invites families to join non-governmental organizations who support large families. This is the only effective way to promote our initiatives and achieve sustainable improvements for large families.”, remarked president Elina Treija.

The Union is grateful to the European Economic zone and Norway Grants Programme “Active Citizens Fund”, private healthcare institutions “Centrālā laboratorija” Ltd and “Veselības centru apvienība” JSC, which will support this campaign throughout the year. It is important to note that “Centrālā laboratorija” has involved Latvian seniors from whom they will purchase knitted items for newborn babies. The Union would also like to express sincere thanks to the regional businesses that have come forward to support the mothers.