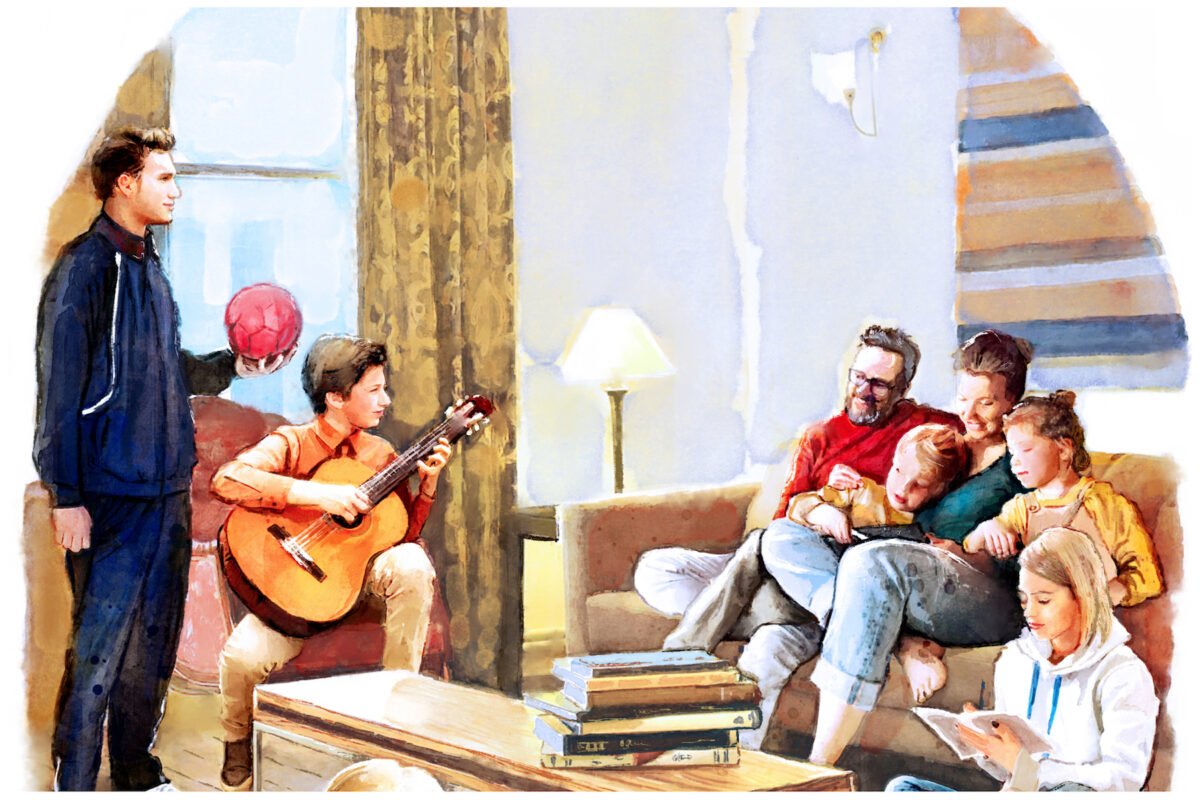 Though large families are the rare exception rather than the rule these days, they remain just as fulfilling as ever

Set in the early 20th century, the 1950 film “Cheaper by the Dozen” gives us a look at the Gilbreths: a mother and father raising their 12 children.

In one scene, a representative from Planned Parenthood, directed to the Gilbreth house by a mischievous neighbor, asks Lillian Gilbreth to head up the local chapter of that organization. Lillian tells the visitor she’ll have to consult with her husband, Frank, who follows her back into the parlor, briefly greets the woman, and then blows a whistle. A horde of children, teenagers and toddlers, thunder down the stairs and gather around their father. When the woman learns that this jumbo-sized assembly is the offspring of Lillian and Frank, she leaves the house horrified.

By any measure, the size of the Gilbreth clan was remarkable even a century ago, but there were plenty of families with five, six, and seven children.

Today, not so much.

With our current fertility rate of 1.78 children born per woman, American families are smaller than ever. A family with four children, once considered nothing out of the ordinary, is sizeable by today’s standards.

Yet big families haven’t quite gone the way of the Brontosaurus.

Let’s have some fun and meet one of them.

That advice comes from Alex Klassen, an energetic and witty mother of six with No. 7 due for a landing in March. Born and raised in Ottawa, she met her husband, Ron Klassen, while attending Christendom College in Front Royal, Virginia, where the family now lives.

Alex recounts the difficulties and the paperwork she encountered applying for U.S. citizenship, including the time she and Ron had to appear before immigration officials with their wedding album to answer questions and demonstrate their union was a true marriage and not some ploy designed to sneak her into the country.

“I was heavily pregnant with my second child,” she says, “and from the look on the man’s face, I think he just wanted me out of the office before my water broke.”

Married for 18 years now, Ron currently works from home as an insurance underwriter while Alex works part-time as the events coordinator for Chelsea Academy, a local private school attended by five of her children. She also enjoys planning events such as weddings and preparing charcuterie boards for parties.

But most of her attention goes to her home, her husband, and her children. The oldest, Timothy, is a high school senior whose passion is sports. Ronald, a junior, “loves fancy, expensive cars, and reads ‘Car and Driver.’” Regina, age 13, plays volleyball and excels in calligraphy, while Grace, 10, also enjoys volleyball, school, and her friends. Like her sister, 7-year-old Stella is a social butterfly and is the premier book-lover in a family of readers. She often spends an hour or two a day sharing a book with her younger brother, 2-year-old Alexander.

For Alex and Ron, and many of their neighbors and friends in Front Royal, large families are the norm rather than—as some may think—weird or unusual. Alex was one of nine children, Ron was the oldest of four, and one of Alex’s sisters has 14 daughters and sons. Mass at the parish they attend is awash in children ranging from newborns to teenagers, and several of their friends from college are also up to their necks changing diapers, running kids to dance lessons, and washing a daily load of laundry.

When asked about the difficulties of raising a large family, Alex brings up housekeeping. Ron values order, and Alex wants everything spotless. When a friend once asked her for three tips on cleaning supplies to keep at hand, Alex recommended hot soapy water, microfiber cloths, and a good vacuum cleaner. She laughs as she recounts the story of the Dyson vacuum repair rep who was surprised that her relatively new machine already required servicing.

“Kids are lovable and delightful,” she says of her battles with dust and disorder. “But they’re also very messy.”

Like the rest of us, particularly those managing large families, inflation has made an impact on the family budget. With the school only a mile away and with Ron’s office in the home, the price of gas has brought few worries, but groceries are another matter. Like any good manager, Alex pays attention to details.

But for Alex and Ron, these are trivialities compared to the delight they take in their kids. In considering some family moments special to her, Alex grows reflective and more thoughtful.

“I guess my favorite time every day is praying the rosary as a family,” she says after a moment. “I look around at them and think how blessed we are.”

As a native Canadian, she’s indifferent to American football, but with Ron having grown up in Kansas, he and the children are avid fans of the Kansas City Chiefs.

“It makes me happy when I’m making our Sunday meal to hear them all cheering and yelling at the TV,” Alex says with a smile. “It’s very American.”

When asked what advice she might offer other mothers, Alex is quick with an answer.

“Nearly every mom has that moment in the grocery store when some older man or woman comes up and tells her to enjoy her children while she can, that they grow up so quickly. I hope moms really listen to that, because it’s so true,” she says.

A Big Picture Point to Consider

Parents with lots of kids are also accustomed to strangers approaching them in the store to comment, “You’ve got your hands full” or to ask, “Are those all yours?” They’re used to certain relatives or friends asking them after each pregnancy if they’re “done.”

Some women I know who went to the hospital to deliver their third or fourth baby were even asked by the staff if they’d like to have their tubes tied while there. These parents also know that certain people, who so often seem to regard human beings as detriments rather than assets to the planet, regard them as selfish and blind to the supposed “carbon footprints” they are creating by having children.

There’s a contrary truth rarely mentioned in this criticism. Since the beginning of the 21st century, the United States is failing to replace its existing native population, as are many other countries around the world. In “How Civilizations Will Be Decided,” an article that recently appeared in The Epoch Times as a repost from Gatestone Institute, Giulio Meotti offers an excellent analysis of these declining populations and the problems they present now and in the near future.

Some countries, such as Japan, South Korea, and Taiwan, no longer have enough young people to fill the ranks of their military. Once remarked for its large, close-knit families, the population of Italy, like most European countries, is in decline.

“By 2050, 60 percent of Italians will have no brothers, sisters, cousins, uncles, or aunts,” Meotti writes.

The consequences of this birth dearth may prove dire sooner rather than later. Just one example: Both here and abroad, this population shift will result in greater numbers of the elderly requiring everything from medical assistance to Social Security, but with fewer and fewer young people to pay the price of that care.

Unlike their distant ancestors, today’s American parents who have lots of children choose to do so. Some may be following the tenets of their religious faith to remain open to procreation and life, but no one who despises children or who groans at the responsibilities brought by parenthood wants a boatload of kids.

The parents of large families—and I know plenty of them—treasure their sons and daughters, guide them in their education and religious faith, and try to help them become moral, hard-working, and compassionate adults. They deserve applause, not condemnation.

As for those five or six kids you see in the grocery store with Mom, someday they’ll grow up. They’ll become doctors, mechanics, teachers, plumbers, moms, and dads. And they’ll be the ones doling out their hard-earned dollars for taxes, serving in the defense of our country, and paying for Social Security.

Depending on your age, their future is your future.