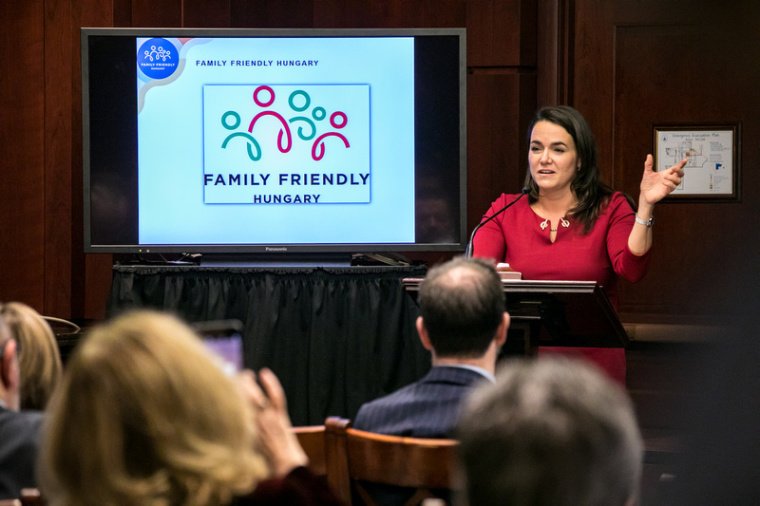 “Hungary plans close cooperation on family protection issues with the United States, Poland and Brazil”, the Ministry of Human Capacities State Secretary for Family and Youth Affairs Katalin Novák declared in Washington after participating in a family policy conference in the U.S. capital on Wednesday.

“Hungary plans close cooperation on family protection issues with the United States, Poland and Brazil”, the Ministry of Human Capacities State Secretary for Family and Youth Affairs Katalin Novák declared in Washington after participating in a family policy conference in the U.S. capital on Wednesday.

This was the second time the family policy conference was held in Washington, but in contrast to the previous occasion Wednesday’s meeting was not just a Hungarian-American discussion, but an international one at which Poland and Brazil were also represented.

In addition to Director of the White House Domestic Policy Council Joe Grogan, American republican politicians, the leaders of conservative political and religious organisations, and experts from Brazil and Spain also took part in the discussion in the Capitol Building.

“It is good to see that people in the United States are regarding the Hungarian family support system as a model, are striving to transpose some of its elements, and appreciate Hungarian family policy in general”, Ms. Novák said in summary in a statement to Hungarian news agency MTI following the conference. She said one indication of this acknowledgement was the fact that a high-ranking White House official and republican congressman Andy Harris from Maryland both gave speeches at the meeting, adding that it is important that non-governmental organisations who are fighting for the acknowledgement and preservation of family values also took part in the conference.

“It is a fundamental piece of experience that certain successful practices can be fully transposed in other countries, or adapted to local conditions”, the State Secretary said. As an example of this she cited the family tax benefit system, which was French practice. “Although much has changed in France, the Hungarian government is following the well-established French example”, she added.

In reply to a question, the politician told the press: “A partnership is being formed with the participation of the United States, Hungary, Brazil and Poland, under the name: Partnership for Families. “We announced it on Wednesday of this week in the UN” she said, underlining the fact that the initiators are not planning a loose cooperation, but an extremely close one. “In practice, this means joint action against anti-family measures that are pushing family life into the background”, she explained.

“But we don’t want to act against something, but in the interests of something, and would specifically like to put forward proposals that facilitate the prosperity of families. We would not like to react to processes, but on the contrary, to be at the forefront of proposals that help families”, Ms. Novák emphasised to MTI.