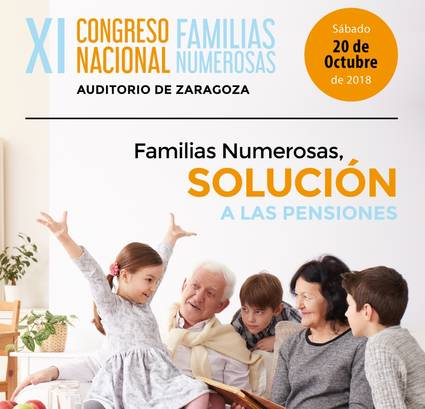 Under the slogan “Large families, solution to pensions”, the Congress will focus on pensions and the uncertain future that is glimpsed around them, and will affect the solidarity exercised by large families in a demographic context such as Spain, which suffers a serious problem of aging of the population. According to the latest data, Spain has a fertility rate of only 1.3 children per woman, which is far from the 2.1 needed for the relief of population. And it is in this scenario that large families appear as a “solution”, since with an average of 3 children they manage to balance the population pyramid and provide hope for the future of pensions.

The Congress will serve as a meeting point for large families from all over Spain, who can enjoy a family day, share experiences with other families and attend presentations and debates on issues of interest to parents. The families that attend may also participate in the raffle of several prizes donated by collaborating companies of the Spanish Federation of Large Families. In addition, being designed as a day for the whole family, a series of children’s spaces will be set up at the congress, with games and workshops for children from 3 to 14 years old, who will be able to have fun while their parents attend the conferences. Due to the experience of other editions, the attendance of about 400 children is expected. The entrance to the Congress (Saturday) is priced at 30 euros per family, including the food of parents and children, as well as participation in all activities scheduled for that day within the program of the Congress.

As in previous editions, the “Large Family José Ramón Losana” Awards will be granted to entities and individuals -Business, Media, Public Organism and Individual Recognition- that have supported and worked in favor of the family and large families.

The Congress offers the opportunity to enjoy a family weekend in a city very suitable for tourism with children. Sunday will be a free day for families, for tourism or any leisure activity you want; There will be free admission to CaixaForum Zaragoza and discounts on guided tours of the city. For families outside of Aragon, the FEFN has negotiated discounts with some hotels and hostels in the city to make accommodation more affordable.

The Spanish Federation of Large Families, organizer of the event, is a nonprofit entity declared of Public Utility since 2003, which works on behalf of large families, a group formed in Spain by more than 675,000 families. In Aragon the number of large families exceeds 16,000.

All the information about the conference here