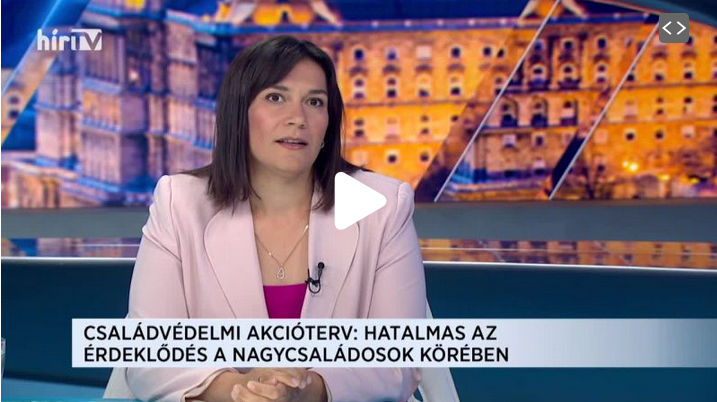 Katalin Gyurkó Kardosné, the president of the National Association of Large Families (NOE in Hungarian) gave a live interview to Andrea Földi-Kovács on the highly appreciated and welcomed state family support package and talked about its benefits and its acceptance among large families.

According to Katalin Gyurkó Kardosné this package will be a great help for families in their everyday life management. There are already 2400 pre car bookings for 7 seated family cars; however, state subsidized purchase is only launched from the 1st of July.

Katalin Gyurkó Kardosné participated in a press conference with state secretary Katalin Novák to introduce the details of the state subsidized family car purchase and to further increase the interests of large families to take this opportunity for buying new family cars. NOE, the National Association of Large Families has already added an information board menu to its official website about the purchase conditions and details.

The South-Danube region’s regional family day and children’s day was organized in Kalocsa where the mayor, József Bálint, and the regional MP, Géza Filvig, who both supported the organization of the program, had a discussion on the region and its families. We also expressed our special gratitude to Andrea Szirtes Kissné, the head of the regional large family association for her hard work in organizing and managing the event which enabled us to get to know the hospitability of the locals of the town and to learn about the values and wonders of Kalocsa such as the Church of the Arch Bishop, the Paprika Museum, the world famous local embroidery and the Bokréta Folk Art Group’s Csajgora Team.

29th of June, Upper Danube Region’s Family Day and the celeration of the 30th anniversary of the Large Family association in Mosonmagyaróvár

“Our life is a present from God and what we do with it is our present for God”. These were my initial thoughts when I was on my way to the 30th anniversary celebration of the ‘Lifetree’ Large Family Association of Mosonmagyaróvár. “The past 30 years were not only full with programs but also resulted in the forming of a strong, supportive large family community including a large family choir, a dance group and a lot of help for NOE. During these years you represented and showed the values and the benefits of living in large families and having more children who make our lives complete.”

“It is highly important what family model media reflects for young people through the values and the lives they present and broadcast” said the state secretary of the Ministry of Human Capacities in the conference on Media for families organized in the Maria Kopp Institute.

The program was organized by the Maria Kopp Institute for Demography and Families (KINCS in Hungarian) and was part of the conference series ‘In the service of families’, this time focusing on the role of media and its effects on the youth in shaping their views on family life.

13th of June, Sharing our thoughts on our future- Conference on our growing responsibilities, Tihany

In 2014 Tihany first hosted the interreligious conference organized by the state secretary of religious relations and the UNESCO’s Hungarian committee. These annual conferences included lectures and speeches of representatives of different religious groups and civil servants exchanging thoughts on mankind’s and our country’s future. Since 2016 the conferences focused on the framework of sustainable future developments and were closed by accepting a common declaration on envisioning a sustainable future and the responsibilities of different interest groups to realize that.

The Elizabeth Foundation for the Children of the Carpathian Basin invited the National Association of Large Families for 10 weekends and offered the association members 700 places for family recreation between 21st of June and 25th of August in Zánka within the Elizabeth Camp. These weekend holidays start at 2pm Friday and last until 10 am Sunday offering two night-holidays for more than 2000 people by Lake Balaton.