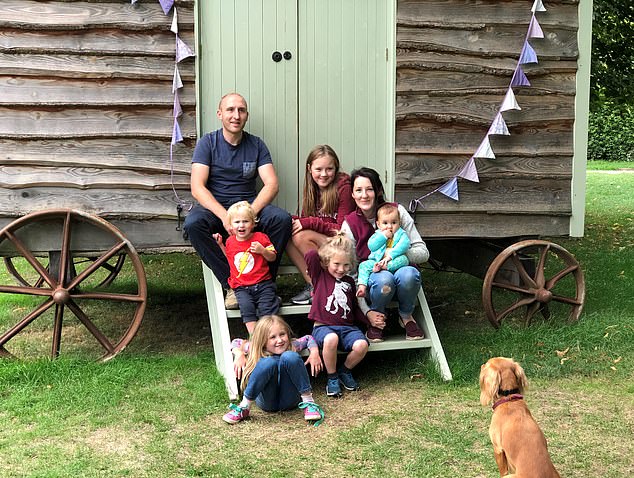 By TANITH CAREY FOR THE MAIL ON SUNDAY

The top floor of the Watson family’s Cambridge townhouse has long been given over to chaos. In the open-plan space for their five young children, aged between one and 11, life is frequently, according to their mother Emily, ‘like herding mice’.

The effort required to take them all out may be Herculean but the family can rely on their seven-seater Land Rover, spend holidays at the homes of friends in Dorset or Cornwall, or visit the country home of Emily’s parents, where her eldest three children stable their ponies.

Emily, 29, says: ‘People tend to say, “Are they all yours?” I get jokes about whether my husband and I have worked out how babies are made yet – or whether we need bunk beds.’

Their busy lifestyle may not be luxurious but it is certainly comfortable – to have such a massive brood in modern Britain it has to be. For the Watsons are one of a growing cohort of affluent, middle-class households bucking the trend for ever-shrinking families.

Across the UK, the size of the average household has dropped significantly due to rising childcare costs and delayed motherhood, with almost half of couples opting to have ‘just the one’. The result is the typical model of 2.4 children from the 1970s has shrunk to 1.9, a record low.

Yet at the other end of the spectrum, large families are growing. Ten years ago, there were 60,000 with five or more children, according to the Office for National Statistics. Now there are 76,000.

Last week, on New Year’s Eve, chef Gordon Ramsay, 52, posted a video on Instagram of wife Tana, 44, showing off her baby bump, which comes after a devastating late miscarriage in 2016. The new addition will be a brother or sister to Megan, 21, twins Holly and Jack, 19, and Matilda, 17.

Rival chef Jamie Oliver and his wife Jools already have five children, aged between two to 16.

Considering that children are the biggest investment most of us will ever make – each will cost an estimated quarter of a million pounds by the age of 21 – a big family may have become the ultimate status symbol.

The trend for large families extends well outside the circle of celebrity chefs.

In the football world, Wayne Rooney and David Beckham have four children each, while Abbey Clancy, wife of ex-England forward Peter Crouch, is also expecting a fourth, after declaring on social media last week: ‘When a hat trick just wont do!!! #babynumber4.’ Emily, who runs her own business, Emily Tallulah Flowers, from her home studio, and her husband David, a former soldier, started early to cultivate their family.

They are used to the astonished looks they get when they go out with Daisy Tallulah, 11, Blossom Harper Rose, six, Buddy Bear, five, Albie Huckleberry Blue, two, and one-year-old Clover Mirabelle (affectionately known as Coco). ‘I avoid going to swimming pools and parks on my own at all costs as the children just scatter in different directions,’ Emily says.

‘Our family has become our social life and we spend most weekends together. The eldest three each have their own ponies at my parents’ home so they spend weekends at the Pony Club riding and mucking out. We love the non-stop chaos of having a big family.’ To manage that chaos, such ambitious families need a larger house, at least two cars, and more cash for holidays, childcare, Christmas and birthday presents and parties, on top of all the basics.

Psychologist and counsellor Phillip Hodson believes that to others, having five children can inadvertently look like a status symbol.

He says: ‘Children are some of the costliest products on the planet. So it can be a statement that, “I can afford to do this and perhaps that you can’t.”

‘Furthermore, it can also be an assertion of masculine virility and female fertility, and for older couples who have been married a long time, a public symbol that the sex between them has not stopped. It may also be statement of dynasty and progeny and pride.’

Helen Healy, a 39-year-old mother of five, is certainly proud of her big family and the closeness between her children. She has Kitty, 11, Ruby, ten, Queenie, eight, Paddy, six, and Elvis, four.

It takes hard work, she says, to afford the lifestyle that allows for so many children.

Her husband Michael gets up at 5.30am to start work at his carpentry business, while Helen works part-time as a dental hygienist.

They manage without a nanny, instead taking turns with the childcare, and they ferry the children around in their two cars, an Audi and a Renault Scenic. As a family, they spend a month every summer with relatives in Ireland.

Helen says: ‘The kids are really close in age and always together. Most are at the same school and when they do homework they help each other.

‘The older ones help out with the little ones too. If one doesn’t want to play something, there is usually someone else who does.

‘We don’t have video games. They play boardgames instead. My eldest daughter has a phone but she is not allowed on social media until she is 16. They have got each other. They never get bored.

‘I was the fifth of six children and I loved my childhood and have stayed very close to my sisters and brothers. In my view, every sibling is a blessing.’

Helen, who says they are hoping to extend their four-bedroom house in Harrow, North-West London, to make more room, adds: ‘Every time I’ve had another one, it’s like bringing an extra person on to the team. They are growing up with their best friends.’

In the past it was the poor and the underprivileged who tended to have bigger families. But a significant sea-change means that no longer rings true. Cambridge University psychologist Dr Terri Apter believes only the better-off are confident they could manage a large family comfortably.

‘It’s easy to see the appeal of a large family – children with their very different personalities, lots of siblings to be companions and allies, and sometimes competition that spurs children on.’

However, beyond that, Dr Apter, author of Passing Judgment: Praise And Blame In Everyday Life, says the reasons may vary.

‘In some cases, having lots of children is a statement of bravado: “See what I can achieve.” For others, it is a matter of protection: “Here is my own tribe, helping me mark out an identity.”

‘What richer families have in common is freedom from the constraints that face most of us as we consider how many children we can realistically care for well enough without going mad.’ Fascinatingly, it is not only the wealthiest families having more children, but the better educated too.

A study in the Economic Journal in 2014 found that there has been a significant increase in fertility rates among the most highly qualified women. That is certainly true of Oxford-educated ‘superwoman’ Nicola Horlick, who has combined her finance career with bringing up six children.

She is also the outgoing president of the Girls’ School Association, which represents some of the country’s top schools. Her large family is something she has been able to combine with a high-flying career – not only due to her head teacher’s salary but thanks to her husband Andrew, who gave up his own teaching career to stay at home.

Gwen, who wanted a lot of children to have the kind of close sibling relationship she never had with her only sister, says: ‘We know we are in a fortunate position to be able to afford it because it’s not cheap.

‘I don’t even want to think about how much we’ve spent.

‘The usual reaction we get from other people is that we are brave or heroic in some way. We’re not. But it is a different way of doing things and it is busy.

‘Andrew and I worked out that in the first ten years of having the kids, we did not have one unbroken night of sleep.

‘By then my youngest children had reached 13, and I was getting on at 44. But I thought I’d give it one more try and it worked and we had Bertie.

‘Also, once you have got four children, it doesn’t feel like it can get much more hectic.

‘When we went to five kids, we had all the joy of rediscovering the lovely things that tiny children do and Bertie’s excitement about events like Christmas, which his older siblings have loved too.’

At times, Gwen says the logistics have been challenging – with herself and Andrew working in tandem as a taxi service trying to ferry their teenagers to their respective parties at the weekends.

‘But I believe coming from a large family produces self-reliant children. They are very good at looking after themselves and one another,’ she says.

‘It’s been lovely to see how their relationships with each other develop. They are a team who always have each other’s backs.’

Indeed, studies into the effects of being born into a large family support Gwen’s view – and the evidence is starting to overturn our assumptions that children get more time and attention when there are fewer of them. Psychologists have also suggested that by focusing so intensely on the success of just one or two children, we are more tempted to hothouse them, depriving them of learning the social skills and independence they need.

Indeed, a growing number of studies have found that a child’s mental wellbeing increases with the number of siblings they have – and that far from arguing more, the more brothers and sisters they have, the less they row.

Emma Citron, a consultant child clinical psychologist from North London, has five children herself aged between 16 and 27.

She says a larger number can change family dynamics – and it’s not money, but time with attentive parents, that children need most.

‘The joke in our family is that if we had a big bowl of soup, my daughter would try to be served first even though there was always enough,’ she says.

‘But it’s not really about finances. The important thing is that children in large families have parents who are emotionally available most of the time.’

Back in Cambridge, Emily says that she is full of admiration for mothers like Jools Oliver and is thrilled that Tana Ramsay is joining the elite club.

Emily, who has so far managed without an au pair thanks to the support of her husband and parents who live nearby, believes that the rewards are worth the overwhelming workload – and the late nights she works on her business to help pay for so many children.

‘Yes, it’s chaos and I wouldn’t go to number six,’ she says, ‘but we love it that all the children have completely different personalities and that they all bring out different qualities in each other. For example, it’s fascinating watching our two-year-old son try to soothe the baby if she is ever upset.

‘I don’t think families with five children are regarded as normal. But this is our normal.’

lTanith Carey is the author of What’s My Child Thinking?: Practical Child Psychology For Modern Parents (published on Dailymail.co.uk)