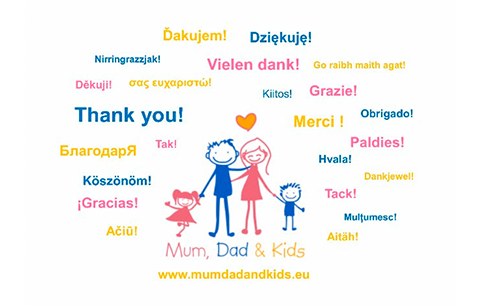 As planned the European Citizens’ Initiative Mum, Dad & Kids ended its’ collection of signatures at midnight on Monday 3 April, precisely one year after the launch of the collection.

One of the two required conditions for the European Commission to consider a European citizens’ initiative was fulfilled several months ago. In fact 12 countries, in other words much more than the 7 requested, surpassed their minimum quota of signatures (the size of the quota varies according to the size of the national population).

Mid-February more than 650 000 signatures had been collected. The last two months the collection was intensified across Europe, confirming the support for the double definition suggested by Mum, Dad & Kids: “marriage is a union between a man and a woman, and family is based on marriage and/or descent”.

Mum, Dad & Kids thanks the hundreds of thousands of citizens in the European Union who supported this initiative through their signature, thereby expressing their wish for a European unity around the double definition of marriage and family that corresponds to the common ground of all EU Member States.

“On behalf of the Citizens’ Committee, I wish to express huge gratitude coming from the bottom of my heart to all those who signed this initiative and to those hardworking volunteers who helped in the collection of signatures. This active and committed community stood up to protect marriage and family in Europe.” says Edit Frivaldszky, Peésident of Mum, Dad & Kids.