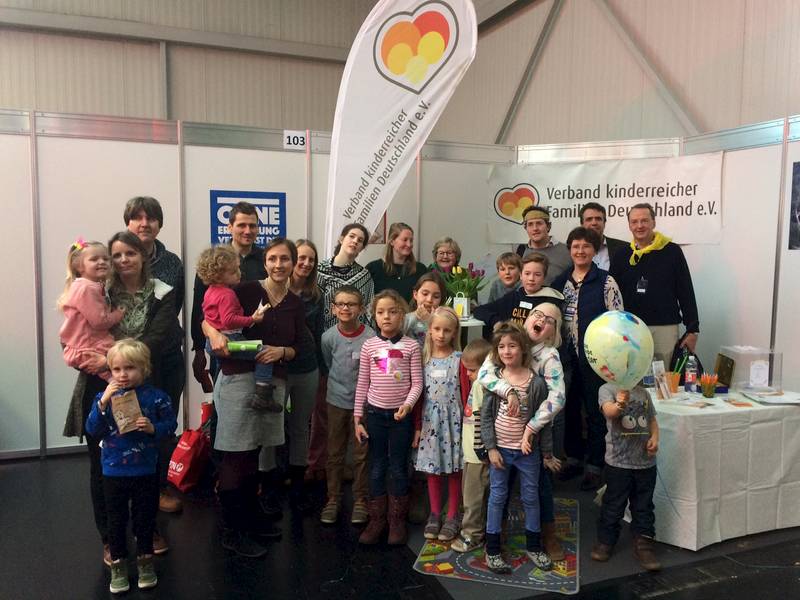 The association of large families in Germany (KRFD e.V.) – founded in 2011 – still registers a huge increase in memberships (in 2017 more than 10 %). It is known and demanded as intercessor for large families in politics, in the economy as well as in the mass media.

In the range of politics the KRFD e.V. worked hard to achieve improvements in the field of child allowance and further benefits for mothers, as it was declared in the coalition agreement of the government. Therefore, the association had different meetings in the Ministries of Finance, Education and Family, as well as personal contact to politicians of various parties. Also in the future the KRFD e.V. will plead for the realization of the promises made by the government as well as those claims of the association itself (e.g. additionally 100 € for the third child).

Various groups of the association in North Rhine-Westphalia and Rhineland-Palatinate had the possibility to report in official hearings of the Landtag of NRW respectively in the expert conference for multiples.

The KRFD e.V. also worked on a government-funded project for democracy, called “Much More“, which deals with strategies to enforce democratic participation, promotion and extension of competence etc. for families. The focus of this pilot project lies on meeting, counselling and supporting large families.

Another interesting project deals with the counselling of large families with children who have special need for promotion or families with disabled children. This project won the Town-Country-Award.

Furthermore, the KRFD e.V. gave the ELFAC Award to the municipality of Essen / Oldenburg, which was reported by the media.

Last but not least, the KRFD e.V. organised different feasts, which were partly attended by approximately 1000 people. The association was also represented by a group of members in the conference „MEHR“ in Augsburg, which was attended by nearly 10.000 young people.

In September, the KRFD e.V. is invited to organise a symposium with the title: “Large families arrived in the middle of our society” which will take place in the context of the Congress for paediatricians in Leipzig.

This year 2018 the family congress of KRFD e.v. will take place in Erfurt for the fifth time.